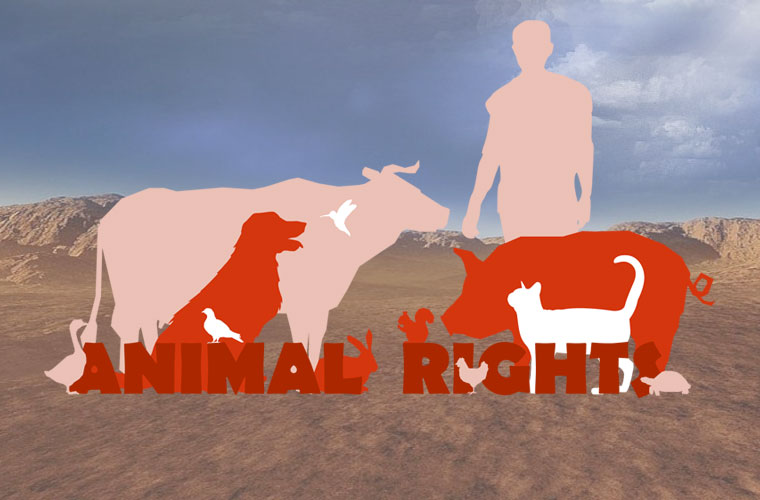 Abdullah Bin Jafar said, one day Apostle of Allah PBUH entered a garden as it was a place dearer to Muhammad PBUH for easing .It was a garden of Ansar (helpers) man .All of a sudden when a camel saw the Prophet Muhammad PBUH, it wept tenderly producing yearning sound and it eyes flowed .The Prophet PBUH came to it and caressed the temple of its head, so it got calm. He PBUH then asked,”who’s camel is this? who’s the master of this camel?.A young man from Ansar came out of the tree shade and said , this is mine Apostle of Allah PBUH. He PBUH said, don’t you fear Allah about this beast which Allah has given in your possession? It is bleating that you keep it hungry and freight-age it heavily which fatigues it “.(qualified as sahih by Sheikh al Al bani).

Allah’s apostle (PBUH) repeatedly , preached and urged his followers to fear Allah regarding animal rights, this is not the only time when Prophet( PBUH) gave voice to the rights of these unarticulate beasts, the history of Islam is full of such events and occurrences. Islam has a specified code of conduct for how to treat animals with kindness, mercy and respect as their custodians. This is what expected from us to be as Allah’s superior creation among all .As Allah said in Holy Quran :And we have sent you O, Muhammad ! but not as a mercy for all that exists.Prophet (PBUH) whole life was a perfect embodiment for all of us that how to lead life in every aspect . Despite of All our love and affirms for Muhammad PBUH,we seldomly get to see people custom Prophet (PBUH) teachings. We discern negligence and ignorance among people when it comes to animal rights.People don’t even consider their unkind gestures towards animals a sin or unethical conduct as they are too ignorant towards animals.We all undoubtedly have witnessed, animals are being treated brutally, they are being stoned, beaten-ed, hunted and poisoned as this is a way of gratification for some when they see animals howling or hear their doleful cry. It’s actually a pleasure seeking activity for many hare-braindes, regardless discrimination of stray animals, zoo animals ,wild life ,marine life and pets ,all are being exploited sadly.

In Pakistan the animal right situation is woefully not examplar. The first law for the animal cruelty precluding and protection of fundamental animal rights was passed back in 1980.It touches upon the illegal animal sale,animal smuggling and unnecessary suffering to them .If any person kills animal in unnecessary cruel manner he shall be punished with penalty for only 200/Rs PKR and guilty will have to go through 6 months imprisonment .Another edition of Animal Protection Index 2014 Pakistan has introduced new edition of the legislation in which one of note is Halal Authority Act (2015)that mandates not only the humane treatment of animal during slaughter but Also prohibited animals seeing each other throughout the whole process.But like all other legislation’s still we haven’t observed any case where the legislation is implemented and guilty has been punished. On the contrary we notice how animals being slaughter in-front of each other ,which surely against Islamic way of slaughter .Animal ill treatment can be seen whether it’s in a case of strays or domesticated animal it could be a pet or livestock ,where some unimaginably expensive animals are kept simply for the purpose of ornamentation or just to flex them as a status symbol but dismally , these poor souls neither treated and vaccinated nor fed properly in accordance to their requirements.These domesticated pets can be abandoned at any time by their owners and sell to animal marketers. The animal markets are diabolical Place for animals, ironically no concerned authorities hold fast check on how animals are kept in these markets.
Donkeys in Pakistan are the most humiliated animals, their plight is worst ,this beast of burden carry over 400 kg of weight and made run on roads for miles under the tremendous heat of 45c. Most of them are not reached to adult age considered minors, under 12 months but indulged into bearing excessive weight and compelled by their owners to run into donkey race.Here we cannot forget the separation of calf from its mother(cow) not only this but slaughter and sell it’s meat in order to save milk which is indeed a psychological distress and pain to cow’s motherhood. This slaughter is open infraction of Karachi municipal corporation, slaughter house By- Laws 1975,”No goat ,lamb ,sheep ,buffalo,cow or ox under 12 months age shall be slaughtered .

Animal abuse is not in practice only by individuals but collectively on government level we can clearlry see the malfeasance, whats happening in zoos of Pakistan where animals are kept deprived of their natural habitat and their recommended diet .Funds allot for the animals maintanance exhibition and to provide them enriched environment in zoos have been conveniently engulfed or usurped by the authorities.We have examples of Karachi and Islamabad zoos deteriorated conditions where even veterinary facilities are insufficient, as majority of vets deal with livestocks and have no training to deal with wildlife. Zoo model in Pakistan does not match the International zoo guidelines.Islamabad Marghzar zoo issue is infront of us which caused abashment to Pakistan due to the inhuman behavior of zoo authorities with animals. Eventually Islamabad High court had to intervene and ordered to move animals somewhere else, but the lion pair suspiciously killed by the caretakers While shifting them from zoo.
The whole Pakistan is aware of kaavan’s story who was living in solitude for 30 years after the death of it’s partner, the zookeeping staff behavior was humiliating with the elephant, which certainly made him aggressive over the time . In the nick of time Kaavans picture got viral on social media his miserable state generated rage on social media and caught mainstream media attention ,then it was send to elephant’s sanctuary in Cambodia over Islamabad High Court orders .There are thousands of cases are heeded on daily bases without being addressed, but who has time to rave about animal rights. Whether it was Suzi elephant who died with different diseases ,Indus river’s blind dolphins issue of extinction and sexual assault, which is a clear depiction of abhorrent behavior towards animals due to lack of awareness.
Many species are on the brink of extinction ,this is an alarming situation as these animals not only play a salient role in our ecological landscape but they also have their own significance in human life cycle.Animals like Snow-leopards ,dolphins ,ibex which are illegally being hunted by foreigners in Gilgit Baltistan,mountain weasels,Asian Black bear which is also not only an ideal target for trophy hunting but also abducted by madaris,Balochistan forest dormouse which is utilized in medicine,black fin-less tortoise which are black market due to their skin and shells including other marine life like bigeye tuna,Siberian cranes,green sea turtles,vole, carcal, marco polo sheep ,even long billed vultures are rare to see .There’s is another issue of houbara hunting in Pakistan ,which is officially banned but sneakily allowed to Arabic princes and their wealthy friends.Government of Pakistan issues 25 to 35 special permits annually for this pupose.

It’s a high time government of Pakistan should intervene and take control over the frequent animal rights violation and also to set an example of Madina ki Riyasat (Islamic Welfare State) where not only humans but even animals are not deprived of their fundamental rights ,as Hazrat Omer RA said ,” If a dog dies hungry on the bank of River Euphrates, Omer will be responsible for dereliction of duty”. The first and foremost thing government of Pakistan Should do is to amend and improvise the legislation Of animal right Act passed in 1980 and slaughter control Act 1963, these laws should be modify and adjust as per the need of present day,must meet the scientific and environmental requirements .No one should be allowed to have private zoos at their homes as many breeders are involved in animal smuggling and forcefully make animals breed which eventually lead them to death.No one should be allowed to keep wild animals at homes ,as we have seen million times wild animals are taken to political processions, we witnessed few months ago in one of PLMN’s rally ,during different religious events and even used as a prop in marriage photography,as we all know that it’s their instinct to dislike crowded places and they can cause harm to humans as well as to themselves in order to escape from the premises . Pakistan is in dire need of specified ministry for animal rights and government must formulate a proper registration system even for pet animals or livestock.Poisoning and killing of stray dogs is not humane way to deal with the problem ,it should be strictly prohibitted as we have some alternatives to curb the overgrowth of dogs by neutring and spaying them and by proper vaccination it’ll protect people from transmitting rabies.Government must construct animal shelters where abondoned ,disabled ,rescued ,injured,homeless,stray animals are provided with food and shelter. Many organizations like Edhi,JFK,ACF,Paws Pakistan etc are serving to this cause and doing sterling work ,without even getting any kind of help or acknowledgement by government.Their work must be appreciated,as these organizations putting a lot of effort without asking for any return.Government role in this regard is substantial not only to supervise these organizations but to support them financially and morally .