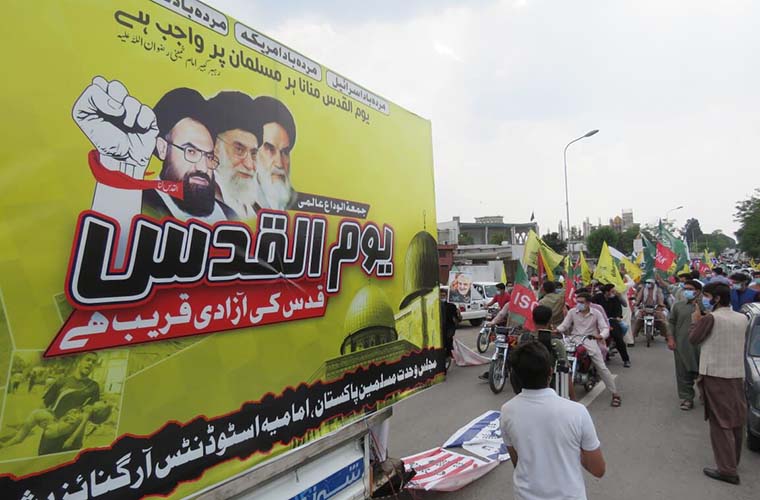 Supporters of Palestine Cause observed the Global Quds Day across Pakistan and vowed support for oppressed Palestinians.

They took to the streets to express solidarity with those waging battle for the liberation of Al-Quds while condemning the Zionists’ authorities.

However, Pakistanis held car and motorcycles rallies due to SOPs regarding Coronavirus to comply with health regulations.

In Islamabad, thousands of fasting Muslims boarding cars drove from the city centre to the square leading to the parliament and the presidential palace after Friday prayers.

Similarly, this sort of huge rally held in Karachi as well as rest of the country.

Besides, pro-Palestinian parties and groups also held events virtually in various cities in the country.

Moreover, seminars and conferences on the Palestine and al-Quds also held.

Pakistanis demonstrated their commitment to continue to support the liberation of occupied Jerusalem and to strengthen the anti-Zionist front.

Furthermore, they called on the Islamic world to unite against the crimes and inhumane acts of the tyrannical Israeli regime.

MWM-ISO-MYC and other parties rally

Notably, Imam Khomeini had introduced the idea of Worldwide Quds Day. Since his passing away, Ayatollah Seyyed Ali Khamenei inherits that legacy.

At the same time, in the cities of Lahore, Peshawar and Quetta, political activists and leaders of Pakistani religious groups marched on World Al-Quds Day.

Besides, they also expressed their anger and hatred against the usurping Zionist regime.

They were also carrying placards inscribed with slogans against Israel and the U.S. and in support of the Palestine and the struggle for liberation of al-Quds.