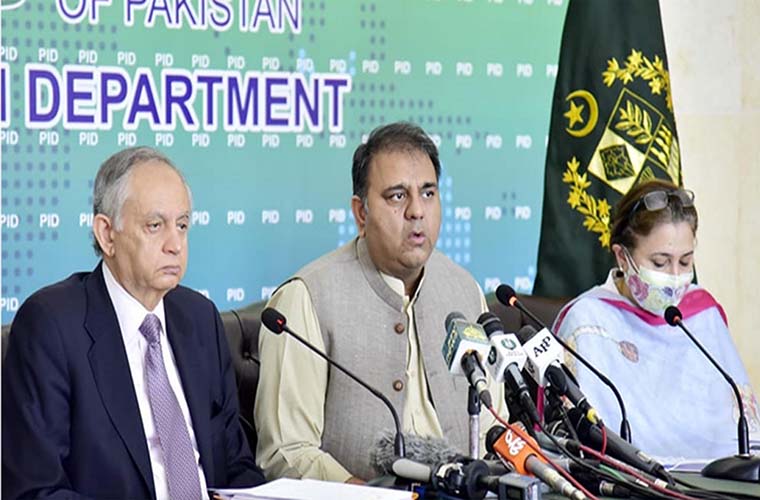 In this regard, Minister for Information and Broadcasting Chaudhary Fawad Hussain elaborated the government’s viewpoint.

He said this, while addressing a news conference along with Adviser on Commerce Razak Dawood in Islamabad on Friday.

Fawad said the government stays ready to approach and hold talks with the opposition parties for the electoral reforms.

However, he emphasized that the opposition parties will have to demonstrate seriousness.

Furthermore, he suggested the Opposition should rise above political point scoring in order to remove loopholes from the electoral system.

He said we want such elections which should remain acceptable to all.

However, he also said the opposition will have to face their cases in the courts.

The Information Minister also spoke on the NA-249 Karachi by-election.

He said we were demanding re polling from day one and now other political parties including the PML (N) are also demanding the same.

Chaudhary Fawad Hussain said the promises made by the PTI are being fulfilled.

He said he is compiling a data on the jobs provided to the people during the tenure of present government.

He was confident that this year will see construction of housing units on a large scale.

Already, he said, the banks have received applications for loans worth fifty two billion rupees.

They have disbursed Rs 12 billion.

Chaudhary Fawad Hussain it is the first government which is standing with the weak segments of the society and focusing on their uplift.

The Information Minister said the federal cabinet has approved Journalists Protection Act. Under that it will remain  responsibility of media organizations to provide safety equipment to the journalists before sending them to the conflict zone.

He further said a body will also be formed to address the complaints of the journalists.

He said payments of four hundred million rupees have been released to the media organizations so that they could timely disburse salaries to the media workers.

Moreover, Fawad said that a program will be started this year to support the media.

He said it is a big opportunity for our companies including the SMEs to use the platform of Amazon to connect with the global market and export their products.

Razak Dawood said the private sector logistics companies have an opportunity to scale up businesses and develop international partnerships for effective delivery.

He further said Pakistan Post is also having automation and preparing itself for parcel deliveries.

Japan agrees to provide Pakistan a grant of Rs1.54bn to fight Covid19