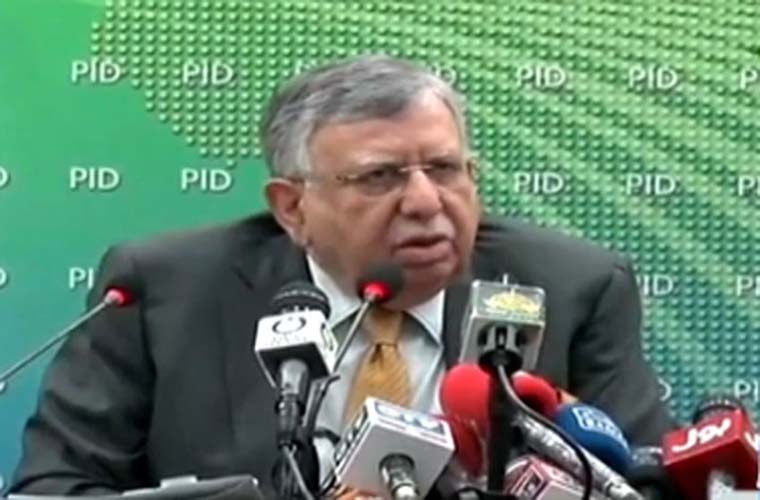 Finance Minister Shaukat Tareen has said the government is pursuing a policy to take the economy towards growth mode.

He said this, while addressing a news conference in Islamabad on Wednesday.

This, he said, will provide job opportunities to the people.

He said that to attain that goal, government would incentivize the industries, agriculture and housing sectors.

He further said that it would also provide job opportunities to the people.

Moreover, he unveiled the way forward.

Tareen said that they have constituted 12 working groups in the Economic Advisory Council.

They formed those groups to frame short, medium and long term policies for different sectors.

Moreover, the Finance Minister noted price stability as key focus and aim of the government to check the inflation to provide relief to the common man.

He further said the government would further expand scope of social protection under Ehsaas Program.

Govt would also make healthcare, employment and skills development part of it.

The Finance Minister pointed out that the FBR has done some good work to enhance the revenue collection.

However, the government has more programs to announce in the next budget to eliminate harassment to encourage the people to pay taxes.

He hailed growth of 57 percent in revenue collection in the month of April this year as compared to the corresponding period last year.

Furthermore, he underlined their target to further expand the tax base.

The Finance Minister said that the govt would introduce reforms in the energy sector.

Besides, it will increase spending on the agriculture sector to strengthen this vital sector of economy.

Moreover, he said we also want to bring Foreign Direct Investment in the export oriented industries in order to bolster our exports.

Shaukat Tareen noted great potential of growth in the IT.

He said a program will be introduced to increase loans for the small and medium enterprises.

Similarly, Kamyab Jawan and Kamyab Kisan programs will be further strengthened to bring prosperity at the grassroots level.

The Finance Minister said Pakistan will not come out of the IMF program but it will seek space from the financial institution given the current situation of COVID-19. He said we have already held some good talks with the IMF and the World Bank.