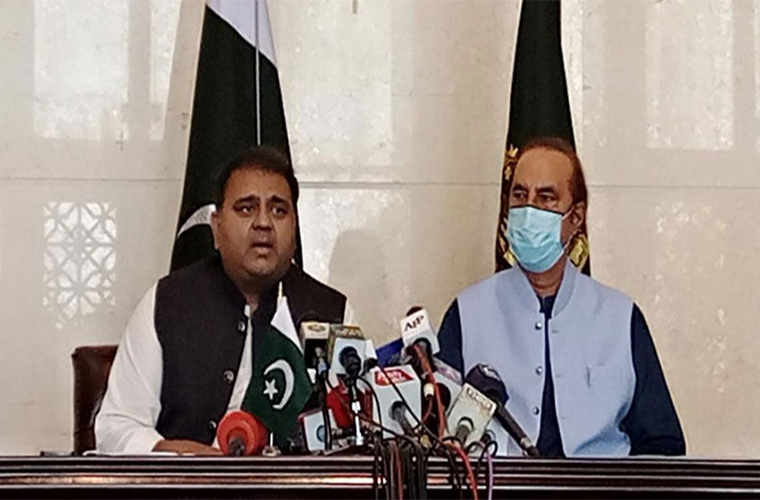 Minister for Information and Broadcasting Chaudhary Fawad Hussain and Adviser on Parliamentary Affairs Babar Awan made this announcement.

While addressing a joint presser, they shared details of the reforms agenda at a news conference in Islamabad on Monday.

Babar Awan said the reforms agenda envisages a series of amendments to the constitution and the Election Act 2017.

He further said that they would put forth reforms agenda before the stakeholders.

Among stakeholders, he also mentioned the civil society, the media and bar councils and associations for their inputs.

Under the reforms package, the Adviser on Parliamentary Affairs said they seek to amend section 103 to allow the use of electronic voting machines to check rigging in the elections.

He said to seek to amend section 94 to give the right of franchise to the overseas Pakistanis.

Moreover, the Adviser on Parliamentary Affairs called for democracy within the political parties.

Therefore, the govt decided to bring an amendment in section 202. Under it the political parties having representation of ten thousand members will be able to get themselves registered.

Awan said that they are introducing a new section of 213A. That will make it compulsory on the political parties to hold their annual conventions.

An amendment in section 15 will provide an opportunity to the candidates to challenge the polling staff.

Babar Awan said it is also being proposed that the electoral rolls be prepared on the basis of registration data available with the NADRA.

He said we also want the delimitation of constituencies on the basis of registered voters.

The Adviser on parliamentary affairs said two constitutional amendments will also be brought with the aim to ensure open ballot in the Senate and allow the overseas Pakistanis to contest the elections.

Babar Awan said that our reforms agenda also envisages the proposal of further empowering the Election Commission of Pakistan.

Minister for Information and Broadcasting Chaudhary Fawad Hussain said the government wants to get the reforms agenda passed from the parliament through consensus.

He said if the opposition parties are not ready for the reforms, it will impede the process of political and democratic development.

The Information Minister said it is the vision of Prime Minister Imran Khan that the political parties sit together to carry out the electoral reforms.

He said the reforms will enhance the confidence of the people, political parties and intelligentsia on the election process.

He defended the use of electronic voting machines in the election saying it will ensure early results.