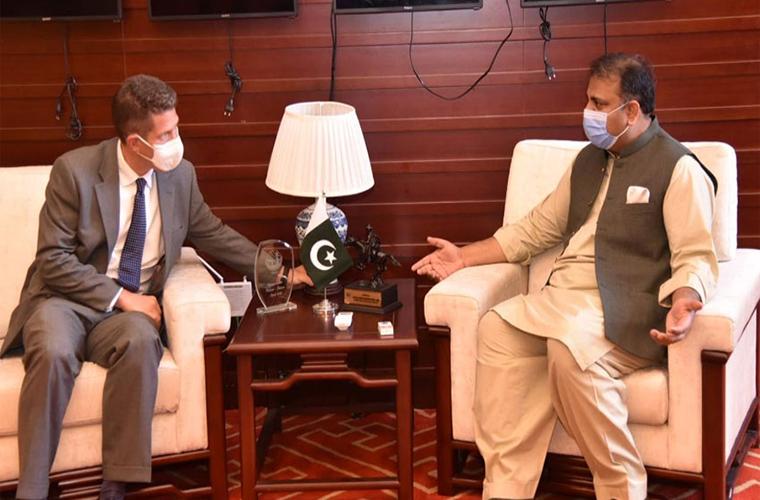 Minister calls for promoting cultural linkages between Pakistan and the UK (United Kingdom).

Federal Minister for Information and Broadcasting Chaudhry Fawad Hussain has emphasized on strengthening cooperation in film production and related fields.

While talking to British High Commissioner Christian Turner, he stressed on promoting cultural linkages between Pakistan and the United Kingdom.

Minister calls for promoting cultural linkages between Pakistan and the UK

The latter  called on him in Islamabad on Friday.

Moreover, the Minister apprised the High Commissioner regarding the Government’s initiative to establish Media Technology University.

He also sought assistance from the British side to build it on the pattern of top UK universities.

Besides, the Minister also discussed with the British Envoy possible arrangements for training of Pakistani set designers and manufacturers by British experts.

Meanwhile, the British Envoy assured of maximum support on the proposals put forth by the Information Minister.

The High Commissioner informed the minister about the planned visit of British men and women’s cricket teams in second half of the year.

He further said that visit of the British musical band would also take place simultaneously.

The Minister welcomed the visit of both the teams and said it would create an atmosphere of festivity for the people looking for quality sports entertainment.

Christian Turner on the occasion also exchanged views with Chaudhry Fawad Hussain on the state of Covid-19 in UK and Pakistan. ‘

President and PM renew pledge to root out terrorism and extremism