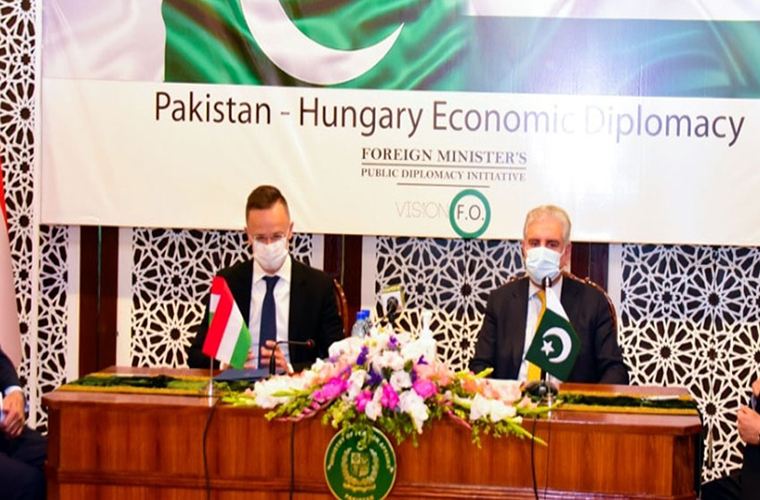 Foreign Minister Peter Szijjarto of Hungary called upon the European Union to fully support Pakistan’s anti-terrorism efforts, especially after the NATO’s decision to pull out from Afghanistan.

He suggested this, while addressing a joint news conference along with Foreign Minister Shah Mahmood Qureshi in Islamabad on Friday.

The Hungarian Foreign Minister said we need the stabilizing role of Pakistan in this region.

He said we should not allow Afghanistan to become a safe haven for terrorists again after the NATO’s pull out.

The Hungarian FM recognized the important role which Pakistan played in the Doha peace agreement between the United States and the Taliban.

Moreover, he shared details of his talks with Foreign Minister Qureshi.

He said we have taken decisions to improve our economic cooperation for the benefit of the two countries.

Firstly, he said we have established a credit line of eighty four million dollars to serve the purpose of enhancement of business to business cooperation between the companies of two countries.

He expressed readiness of Hungary to provide fifty million dollars to Pakistan for the development of agriculture, water and food processing industry.

He nodded it with at least fifty percent participation of the Hungarian companies in these projects.

The Hungarian Foreign Minister said both the countries have signed a MOU today.

They signed it for the continuation of 200 scholarships for Pakistani students in the Hungarian universities.

Furthermore, he said his country will continue to support Pakistan’s GSP plus status in the European Union.

He said they have expressed their interest for developing partnerships with companies in Pakistan.

He further said today we signed a number of agreements including on dairy production and cyber security.

It will enhance our people to people contacts and further promote business activity between the two countries.

The FM said both Pakistan and Hungary share identical views on FATF that it should not be used as a political tool but only serve the purpose of checking money laundering and terror financing.

Qureshi further announced next round of political consultations between the two countries in the Hungarian capital Budapest.

PM vows neutrality in the dispute between Saudi Arabia and Turkey