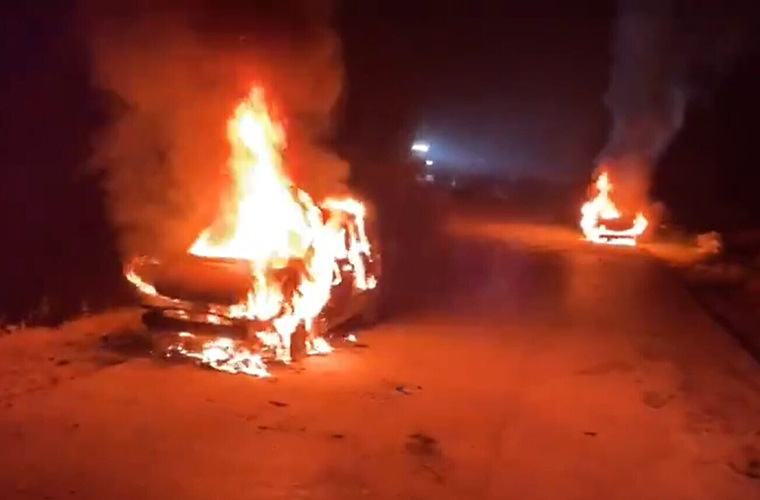 The incident happened in Beit Iksa, next to Jerusalem’s Ramot neighborhood.

Only a security barrier separated it from the rest of the West Bank.

All this happened, amid continued tensions between Jews and Arabs in the capital and a series of mutual attacks.

The Haaretz daily quoted Some Beit Iksa residents as complaining that an Israeli fire truck came but didn’t put out the fire.

They had to wait for a Palestinian fire truck, which took longer to arrive.

However, they tried to blame “Tiktok” along with a star of David for this.

They tried to make it an apparent call to respond to a series of videos posted to the popular social media app that showed Palestinians attacking random ultra-Orthodox Jews without provocation.

Although they posed as though the clips have fueled Jewish anger, yet illegal occupation of Palestinian land remains the root cause of the problem.

Palestinians fear for families, not for cars

Meanwhile, a Palestinian resident Abdullah Hamdan told Haaretz that cars aren’t important, we are afraid for our families.

“This time they damaged cars, next time they’ll harm people.”

Tag Meir, a Jewish group advocating for coexistence and opposes price tag attacks, linked the incident to a march last week in Jerusalem by the far-right racist group Lehava.

According to Tag Meir head Gadi Gvaryahu, whoever stayed silent after the hate march of Lehava on Thursday is reaping the whirlwind.

After the incident, dozens of Jewish residents of Ramot gathered and chanted “May your village burn,” until police arrived and dispersed the crowd.