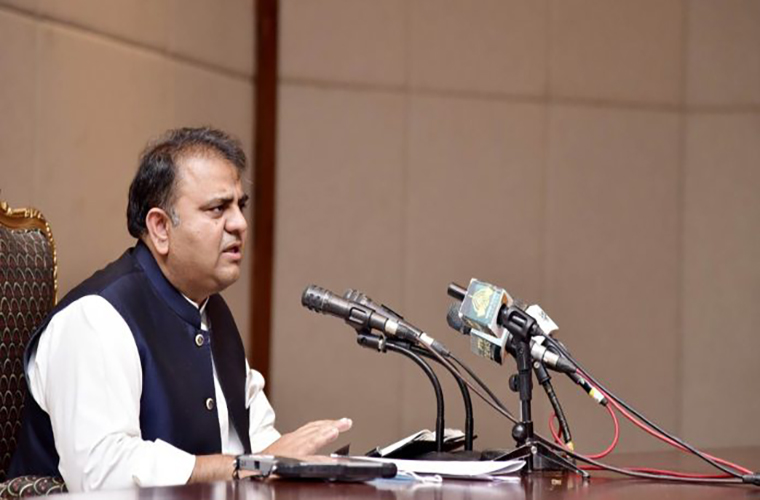 Cabinet for consensus on electoral reforms and electronic voting machines.

Minister for Information and Broadcasting Chaudhry Fawad Hussain on Tuesday urged the opposition to submit their suggestions for electoral reforms to hold the next general elections through electronic voting system.

He said this, while apprising media persons about the decisions taken by the Federal Cabinet.

He said that Opposition should give input also on granting the right of vote to nine million overseas Pakistanis.

The government, he said, wanted to move forward on the electoral reforms with political consensus.

Prime minister had written a letter to the National Assembly speaker to engage the opposition on the matter.

The speaker, he said, had also written letters to the opposition leaders for their input on the electoral voting system but so far no reply had been given by them.

Moreover, Fawad said the government could not wait for the opposition’s response indefinitely.

Because it wanted to hold next general elections through the electronic voting machines (EVMs) and grant overseas Pakistanis the right to franchise.

He lamented that both the Pakistan Muslim League-Nawaz (PML-N) and Pakistan peoples Party (PPP) wanted to oppose the move of granting the right of vote to the expatriates because they don’t support them. ‘

He suggested the two parties should openly express their viewpoint whether they wanted to give the vote right to the overseas Pakistanis or not.

The minister said Special Assistant to the Prime Minister on Health Dr Faisal and Minister for Planning Asad Umar briefed the cabinet about the the latest coronavirus situation in the country.

Around 5,000 patients suffering from the deadly virus were in critical condition, the highest number as compared to the last two peaks of the contagion when the maximum number of serious patients remained 3,400.

He said currently Pakistan was producing 792 metric tons of oxygen to meet the requirement of COVID-19 patients. The situation in Pakistan would have different had it not increased 7,000 ventilator beds and doubled the production of oxygen during the last one year.

It was decided that the oxygen meant for the industrial sector would also be diverted to the health sector if the situation worsened.

Import of oxygen from China and Iran

The government, Fawad said, was also considering import of oxygen from China and Iran if the need arose.

The minister said Prime Minister Imran Khan had directed to ensure supply of essential items during the pandemic.

Furthermore, the government was trying hard to avoid complete lockdown. It is also considering to announce five-day holidays for Eidul Fitr.

Fawad urged the people to get themselves vaccinated against the virus. Around one billion people, across the world, had so far been immunized against the disease.

He said 3.7 million doses of the coronavirus vaccine remain available in the country.

Now 40 and above people remain eligible for vaccination.

He appreciated the print and electronic media for creating awareness among the people to follow the Standard Operating Procedures against the pandemic.

Furthermore, he said the prime minister while chairing the meeting of National Coordination Committee, had observed that in case a complete lockdown were imposed, the government would have to ensure supply of the essential commodities.

The five-day Eid holidays would ease burden on the cities as the pandemic was an urban phenomena.

The information minister said the cabinet also had a detailed presentation on the electricity sector’s circular debt.

Due to inefficient policies of the previous government and 40-50 per cent excessive production of electricity the capacity charges of plants had increased from Rs 450 billion to Rs 900 billion.

“It means that the government has to pay Rs 900 billion to the power-producing companies whether we use electricity or not.”

The cost of per unit electricity production stand at around Rs 22 or 23.

Fawad said had the full cost of electricity production passed on to the consumers, all the industry would have collapsed because of unaffordable power.

The prime minister had asked the quarters concerned to find a way to get rid of the capacity charges issue without increasing the electricity tariff.

He said that they can resolve the issue through shutting down inefficient power production plants.

Some had already been closed and the remaining would be shut down by September 2022.

That cost extremely expensive because we are giving Rs 6,00 billion to these IPPs.

The government is negotiating for the purchase of the 11 IPPs so that these could also shut down as per its policy.

He said the sector’s line losses had also come down from 18.3 per cent to 17. 8 per cent, despite the increase in the electricity price which showed the government’s good performance.

As regards the national flag carrier, the minister said the cabinet came to know that the operational losses of Pakistan International Airlines (PIA) had come down from Rs 57 billion to Rs 1 billion.

They noted it as a ‘great success’ of the present management. However, real problem of the PIA remains its loan which caused an overall loss of Rs 460 billion.

Fawad said the national flag-carrier’s per aircraft staff ratio stood at 450, the highest in the world.

The previous governments of the PML-N and PPP had ruined the national institution. Because they made political and unnecessary appointments.

They conveyed their recommendations over the Jehangir Khan Tareen issue.

The meeting discussed all the issues in detail.

Jehangir Tareen was a very important leader of the PTI and the top leadership believed in rule of law and fair play.

However, the PTI government would not influence any department at any cost to give someone any kind of relaxation in inquiries.

But the PM had given a task to Senator Ali Zafar to look into the reservations of some of the Members National Assembly (MNAs).

Those MNAs complained of a deliberate or politically motivated attempt to malign Jehangir Tareen.