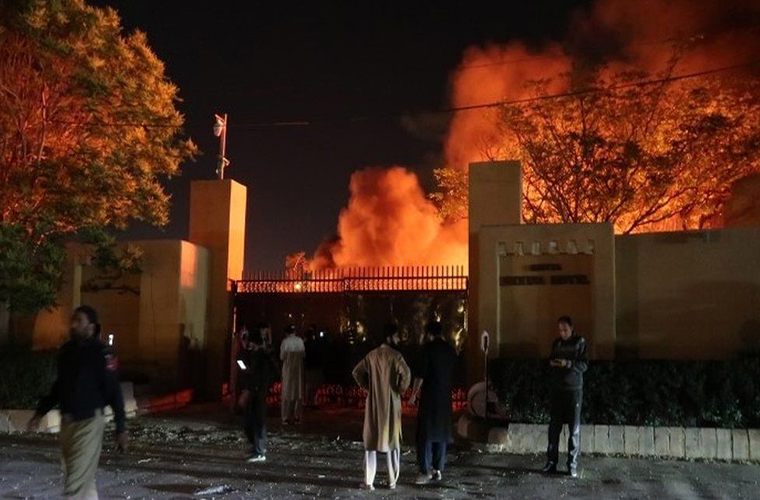 President Dr. Arif Alvi says the enemies of Pakistan want to disrupt peace and create law and order situation in the country.

In a statement on Thursday, he strongly condemned the Quetta Serena Hotel explosion.

He further said the elements involved in such cowardly acts in the holy Ramadan are enemies of the country and Islam.

He expressed grief and sorrow over the loss of precious lives in the incident.

Moreover, he prayed for the departed souls and for early recovery of those injured.

He was monitoring the whole situation till late at night.

The PM directed the Ministry of Interior to investigate the incident from all its aspects and reach the depth of the matter.

He said nation stands soldier to soldier with the armed force of the country to foil the neferious designs of the terrorists to destablize country in the holy month of Ramazan.

He expressed grief and sorrow over the loss of precious lives in the incident and sympathized with the affected families.

The Minister sought a report from the Balochistan Chief Secretary over the tragic incident.

Meanwhile, Minister for Information and Broadcasting Chaudhry Fawad Hussain said the enemies of Pakistan’s peace and progress will fail in their nefarious designs.

He said the whole nation is united against terrorism and will continue collective efforts till purging the country of its remnants.

Furthermore, they expressed deep grief and sorrow over the loss of precious lives.

Earlier, four people including a policeman lost lives. 12 others injured in a car bomb blast in the parking area of Serena hotel in Quetta last night.