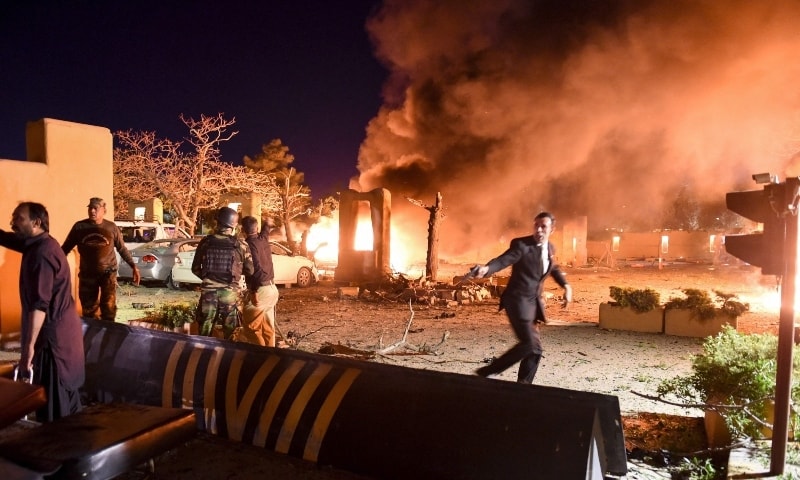 Quetta Serena Hotel blast kills four and injures 12 people on Wednesday night.
According to official sources, a powerful bomb exploded in the parking lot of the Serena Hotel in Quetta.

Moreover, DIG Azhar Ikram said that the explosive device apparently fitted in a vehicle.
According to initial investigations, a police official also embraced martyrdom in the blast.
Meanwhile, security, fire and rescue officials rushed to the hotel.
They disallowed others from going near the site of the explosion that took place at around 10:15pm.
While addressing a press conference, Balochistan Home Minister Mir Ziaullah Langove noted a wave of terrorism in the region.
He further said: “Our own people involved in these acts of terrorism.”
However, he said they received no threat alerts before the attack.

Moreover, he also addressed media reports about the Chinese ambassador as the apparent target of the attack.
The minister clarified that the ambassador not present at the hotel when the explosion occurred.
Langove said he had just met the Chinese ambassador and found him in high spirits.
He said that the probe would ascertain the target of Quetta Serena Hotel blast.
Meanwhile, Balochistan government spokesperson Liaquat Shahwani said the incident was being investigated from all angles.
As per his tweet, those involved will not be able to escape the grip of the law.

According to BBC, the Pakistani Taliban have claimed the attack, without giving details.

In recent months the group, and other militant organisations, have stepped up attacks in tribal areas near the border with Afghanistan.

PM greets nation on the occasion of Shab-e-Barat

Minister notes failure of Opposition in toppling the PTI govt