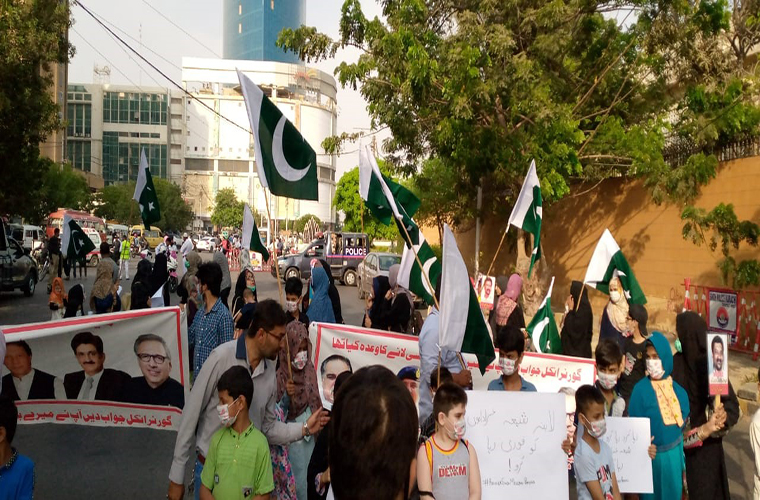 Children of Shia Missing Persons holds sit in protest outside Governor House against enforced disappearance of their bread-earners.

The children along with mothers gathered at the main gate of Sindh Governor House and registered their protest under the aegis of Joint Action Committee for Shia Missing Persons. 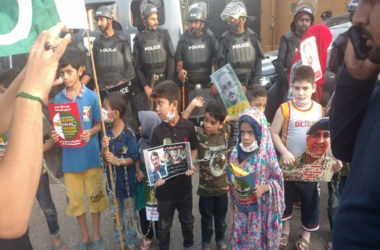 They are carrying banners and placards inscribed with their demands and slogans.

Emotional scenes witnessed during the protest because children sat chained.

Some of them carried images of President, Prime Minister, Chief of the Army Staff and Governor.

While speaking on the occasion, the families said that Governor Sindh Imran Ismail represents federation of Pakistan. Therefore, they have held sit-in protest outside Governor House.

They further said that they are demanding legitimate right to end enforced disappearance of patriot Shia youth and notables.

Later, they shared their viewpoint and demands in a memorandum which they wanted to hand over to the Governor House. 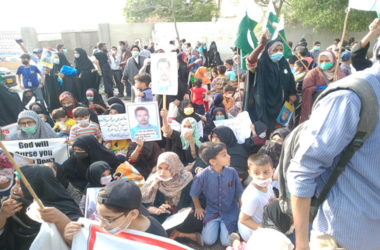 However, Governor Sindh Imran Ismail refused to meet them.

Therein, the families and the committee also referred to unabated anti-Shia persecution and targeted murders since 1990s.

Protesting families and the committee lamented unfair and discriminatory policy regarding peaceful and patriot Shia community.

They lamented that the families of victims of enforced disappearance have been protesting for last 20 days outside mausoleum of founder of Pakistan but the state authorities have not even bothered to address their grievances.

Sit-in protest under the aegis of Joint Action Committee

Now, they are holding sit-in protest under the aegis of Joint Action Committee for Shia Missing Persons under fourth phase of the protest movement.

The families further said that now they are protesting for recovery of those 33 victims subjected to enforced disappearance for more than a year to 10 years.

Meanwhile, parents of some of the ill-fated victims have died, after having longed for rejoining of the victims with their families.

Even children have been suffering from diseases due to lack of their patrons with them.

Besides, their mothers have become fed up due to hopelessness regarding the victims.

PTI parliamentarians meet PM to discuss issues of their constituencies