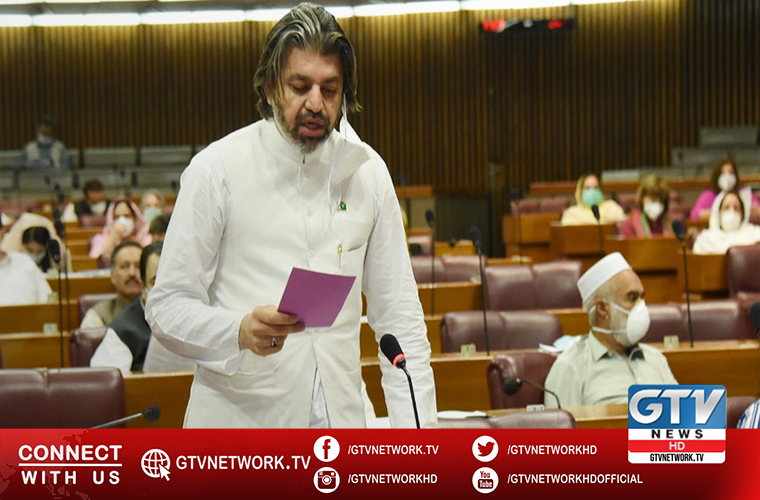 Minister of State for Parliamentary Affairs Ali Muhammad Khan presented before the house the Annual Report of Pakistan Information Commission for the period 1st January 2020 to 30th November 2020.

While responding to a calling attention notice from Gul Dad Khan and others in the house today, Parliamentary Secretary for Interior Shaukat Ali spoke on the notified borders.

He named Torkham, Chaman, Badini, Angur Ada, Ghulam Khan and Kharlachi among them.

The movers of the calling attention emphasized the need for enhancing trade and economic relations between Pakistan and Afghanistan.

Moreover, they said more crossing points should be opened between the two countries to achieve the objective.

Government side told the house that notified borders with Afghanistan remain open for trade and business activities.

Meanwhile, Minister for Energy Omer Ayub Khan laid before the house the Regulation of Generation, Transmission and Distribution of Electric Power Amendment Ordinance 2021.

Two bills were also laid before the house today. These included: The Muslim Family Laws Amendment Bill and the National Commission on the Rights of Child Amendment Bill.

Meanwhile, the chair referred the bills to the standing committees concerned.

She said they have prepared a bill against the forced conversions.

Later, PPP leader Naveed Qamar said his party will fully support any bill aimed at protecting the rights of minorities.

However,  Minister of State for Parliamentary Affairs Ali Muhammad Khan said the situation has returned to normalcy in the country after the steps taken by the government to deal with the violent protests of a religious group.

Khan further said all the roads have been opened. He said no group can be allowed to disturb the law and order situation and dictate its terms to the government.

He said neither the religion nor the constitution allows attacks on the police personnel.

The Minister for Parliamentary Affairs recalled that both the houses of the parliament passed unanimous resolutions.

They unanimously and strongly condemned the publication of blasphemous material in France.

Meanwhile, the Speaker said that we are all ‘Aashiq-e-Rasool’ and can sacrifice our lives for the sanctity of Hazrat Muhammad Sallallaho Alaihe Wa Sallam Khatam-un-Nabiyyin.

The House will now meet on Monday at two pm.

Pakistan and Uzbekistan shows resolve to enter into PTA