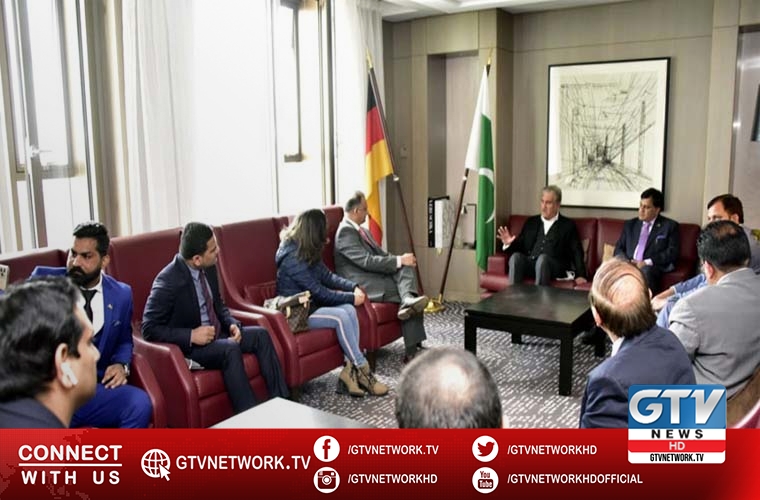 Foreign Minister Shah Mahmood Qureshi has said the economic relations between Pakistan and Germany will be taken to a new direction.

He expressed these view, while talking to a delegation of Pakistan community in Berlin.

The Foreign Minister said his meetings with the German counterpart and other leadership remained very productive.

Moreover, the FM termed the Pakistani community in Germany an important source of strong bilateral relationship between Pakistan and Germany.

He said we have introduced Roshan Digital Pakistan project to facilitate the overseas Pakistanis send their remittances through legal means.

Qureshi further said the government is also making serious efforts to give right of franchise to overseas Pakistanis.

Meanwhile, the delegation thanked the Foreign Minister for announcing the opening of embassy in Munich.

Meanwhile, Foreign Minister Qureshi has said that Pakistan gives immense importance to its relation with Germany.

He said this, while talking to President German Parliament Dr Wolfgang Schäuble in Berlin on Monday.

He further noted the presence of separate Pak-German Parliamentary Friendship Groups in both upper and lower house of Pakistan a welcome step.

The FM expressed hope that the Germany Parliament would also reciprocate and form a “Special Friendship Group.”

The proposed group in the German Parliament can promote bilateral parliamentary relations and benefit from each other’s experiences.

Moreover, they also discussed bilateral relations, promotion of ties at parliamentary level and other matters of mutual interests.