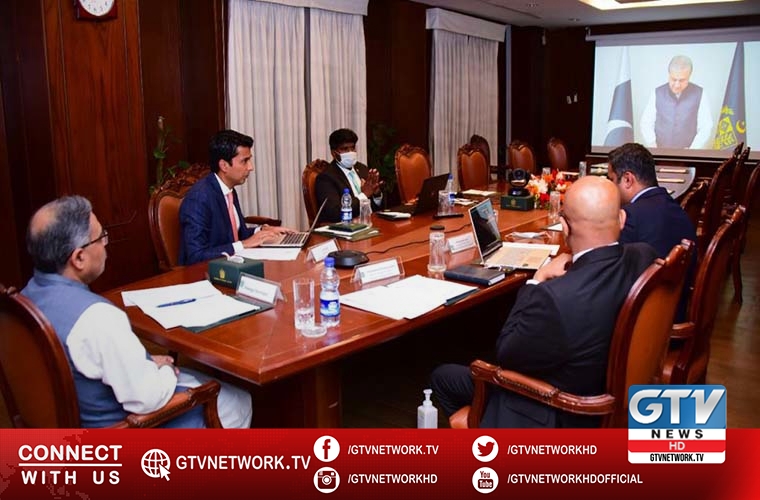 Besides, it aims at engaging the diaspora to create necessary linkages for international collaboration.

The event held under the aegis of foreign ministry and Pakistan Embassy in Washington Thursday.

Shah Mahmood said that Pakistan’s Science Diplomacy strategy was aimed at supporting its science and technology landscape, and engage the diaspora to create necessary linkages for international collaboration.

The foreign minister,  said the success of science and innovation was not merely restricted to intellectual prowess, but also to the ability of public institutions.

It also helps the governments to provide an enabling environment for innovation, commercialization and effective absorption of research and development products and services.

“Our Science Diplomacy (SD) strategy looks both inwards in supporting our S&T landscape, and outwards with the objective of engaging our diaspora to create necessary linkages for international collaboration,” Qureshi said.

He said in order to effectively engage with Pakistanis residing abroad, the foreign ministry had initiated a Diaspora Outreach Research and Innovation Network (DORIN).

Foreign Minister Qureshi said this data-basing and networking effort would allow the government to create research and innovation linkages, and drive value from the experience of its diaspora across the world.

He said the government intended to add a new dimension to the ways Pakistan’s embassies and consulates across the world could engage and create synergies for Science, Technology, and Innovation (STI) collaborations.

The foreign minister thanked the participants both from the US and Pakistan for their interest in the summit which was a testament to their commitment to the betterment and progress of Pakistan.

He hoped that the Start-up Summit would provide a multi-stakeholder engagement for a better understanding of the start-up landscape and opportunities in Pakistan.

He said the ongoing pandemic was an ideal case study of how science and technology could be leveraged in addressing some of the most pressing challenges of the 21st century.

The pandemic has shown that despite forces of fragmentation, human capacity to innovate has prevailed.

“Several challenges faced by humanity today, such as climate change, food security, poverty reduction, and economic disparities have scientific dimensions. This warrants a coordinated scientific response,” Qureshi believed and said the role of science and technology in international relations was getting more pronounced.

Qureshi said the development of socio-economic development and sustainability were among the government’s priorities. The government is giving special attention on addressing the issues like poverty, food security, malnutrition and climate change, he added.

He said it was in the best interest of the country to support innovation and lead the global effort in tackling resource security.

Pakistani diaspora in the US

Foreign Minister Qureshi said Pakistani diaspora in the US had been doing a commendable job in contributing to US’ knowledge economy, as well as achieving highest level of excellence in different professions.

He also appreciated the efforts that the Pakistani community in the US was connecting with the knowledge economy of Pakistan. We want enhancement of this connectivity for sustainable linkages, he added.

The foreign minister believed that Pakistan could untap the potential its youth by offering them sufficient opportunities and platforms to grow. He said the start-up ecosystem in Pakistan was one such avenue which was featuring more and more success stories.

Qureshi told the participants that the event was the first in a series of region-specific summits which would enable Pakistan to benefit from the expertise of its innovators and enable its Missions abroad to effectively execute science diplomacy related initiatives.