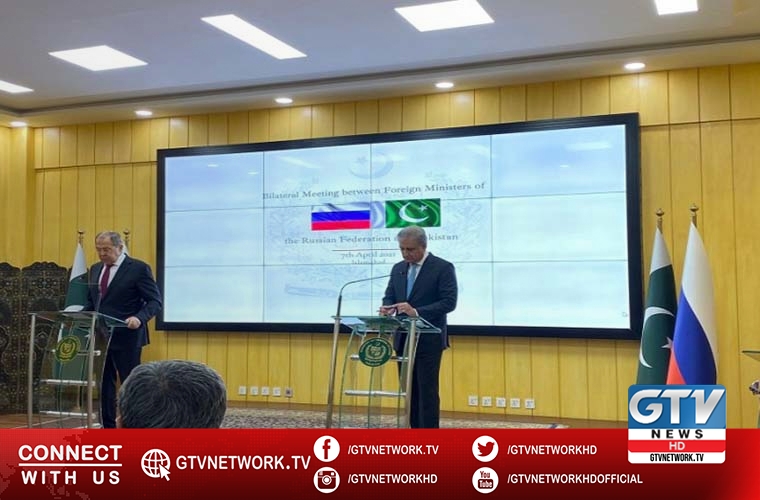 The FM Lavrov mentioned economy, trade and defence among the sectors of bilateral cooperation.

Later, he and his Pakistani counterpart addressed a joint news conference.

The Russian FM said his country stands ready to further build counter terrorism potential through provision of military equipment. He underlined this in the interest of all states of the region.

Sergey Lavrov further said both the sides have agreed to further conduct military exercises and drills.

He expressed satisfaction over forty six percent increase in bilateral trade. He however stressed there is need to further diversify it.

Lavrov also discussed the opportunities in the energy sector. He said both countries are now discussing a new protocol on Stream Gas Pipeline project.

He said as soon as singing takes place, the construction work on the project will begin.

Voicing concern over the deteriorating security situation in Afghanistan, he said Pakistan and Russia have agreed to further facilitate the parties to reach an agreement to put an end to civil war through an inclusive political dialogue.

Sergey Lavrov said we believe that against the backdrop of tensions in the region, we should not forget the task of establishment of the state of Palestine. He said Russia stands ready to facilitate direct dialogue between Palestine and Israel.

In his remarks on the occasion, Foreign Minister Shah Mahmood Qureshi said Pakistan is keen to build a strong multifaceted relationship with Russia.

He said there is a new approach and mindset in Pakistan for relationship with Russia. We feel that not just we have geographic proximity but Russia is a factor of stability in the region and the world at large.

He said Moscow has always advocated primacy of international law and multilateralism.

These are principles that Pakistan adheres to. Our coordination and cooperation at the United Nations level has been excellent.

He reaffirmed the commitment to deepen relations with Pakistan and create win-win cooperation between the two countries.

Alluding to the discussion that took place on the entire spectrum of bilateral relations, the Foreign Minister said we have agreed to hold the intergovernmental commission meeting this year in Moscow, expressing the confidence it will lay the foundation for a more meaningful economic relationship between the two countries.

Regarding Stream Gas Pipeline project, the Foreign Minister said we have overcome many of the obstacles, reassuring the Russian counterpart that Pakistan wants to go ahead and committed to the project.

The Foreign Minister said that he also briefed the Russian counterpart about the human rights situation in Indian illegally occupied Jammu and Kashmir.

Describing the visit of Russian Foreign Minister an important one, he said it is taking place after almost a decade. He noted this visit will further deepen bilateral relationship and friendship and we intend to maintain this momentum and high level contacts.

Ambassador of Iran calls on Minister for Religious Affairs Qadri