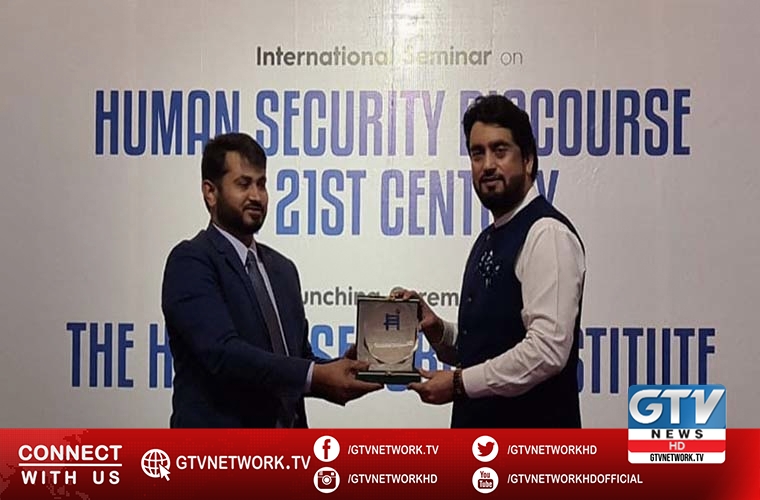 Seminar on Human Security Discourse in 21st Century held under the aegis of a think tank.

He called upon the prosperous world to intervene into the Illegal Indian occupation of Jammu and Kashmir.

Afridi further said 600 days passed since the abrogation of Articles 370 and 35-A.

He lamented the world has failed to act and stop colonialization of Jammu and Kashmir by India.

He said that the United Nations must learn from the failure of the League of Nations and play its role in resolving longstanding issues hampering peace and development in the world.

Shehryar Afridi said that the world is spending a lot on ecological development and green development. But Indian forces are removing forests and houses through blatant use of explosives. He accused them of depriving the Kashmiris of their houses and their green habitat.

When the intruding forces occupy your lands, kill your loved ones, rape your women and take away your lands, the world is not allowing the Kashmiris to fight the Illegally occupying forces.

This is an irony that Kashmiri freedom fighters are being branded as terrorists despite the fact that a trained and well equipped military is implementing genocide of the Kashmiri people.

She said that the government has taken bold steps to ensure health security of the general public has health is the fundamental dimension of human security.

Moreover, she said the global pandemic has threatened economies of over 200 countries across the world and Pakistan dealt the situation with coordinated strategy.

She said that in epidemic situation the government, with financial constraints, utilizing its all available resources to ensure health, food, energy and all types of other securities.

She said that the country is needs to ensure human rights to prevent the citizen from exploitation by external powers and players.

The minister said the state is not a sole actor in security calculation and all stockholders should play their due responsibilities in this regard.

She further said in the past the US has violated human rights laws threatening Pakistan Security through drone strikes and targeting Pakistani individuals.

She said Pakistan is committed to strictly ensure provision of human rights to its citizens and refugees as well according to the constitution and some legislation have been made so far.

Mazari said, unfortunately, the world has turned a blind eye to the atrocities in Kashmir committed by Indian Occupation Forces since several decades violating the international law and United National Resolutions.

Six killed as van plunges into canal in Mianwali