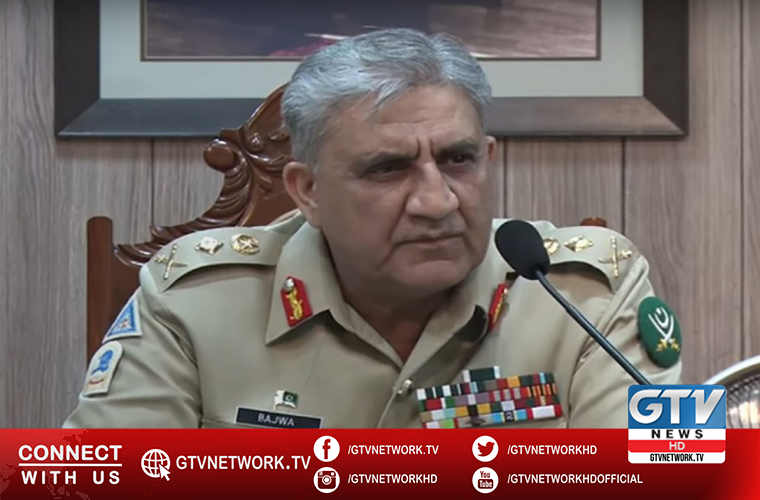 He underlined stable Indo Pak relations as a key to unlock the untapped potential of South and Central Asia, while ensuring connectivity between East and West Asia.

But he regretted that the potential has remained hostage to the disputes and issues between the two neighbors.

He further said Pakistan stays ready to resolve all outstanding disputes with its neighbors through dialogue in a dignified and peaceful manner.

However, Chief of Army Staff General Qamar Javed Bajwa made clear that this choice of Pakistan based on rationality, and not as a result of any pressure.

Moreover, he noted it high time for creating synergies in South Asia through connectivity.

Besides, he called for peaceful coexistence and resource sharing to fight hunger, illiteracy and disease instead of fighting each other.

He said without resolution of Kashmir dispute through peaceful means, process of sub continental rapprochement will always remain susceptible to derailment due to politically motivated bellicosity.

Furthermore, he said it is time to bury the past and move forward.

However, he said our neighbor will have to create a conducive environment particularly in Indian illegally occupied Jammu and Kashmir for the resumption of dialogue process.

Pakistan has learnt from the past

The Army Chief said Pakistan has learnt from the past and willing to move ahead towards a new future.

However all this is contingent upon reciprocity.

The COAS said despite being an impoverished region, we end up spending a lot of money on defense which naturally comes at the expense of human development.

He said Pakistan is on the few countries which despite rising security challenges has resisted the temptation of involving itself in an arms race. He said Pakistan’s defense expenditure has rather reduced instead of increasing. This is not an easy undertaking especially in a hostile and unstable neighborhood.

The Army Chief said Pakistan’s robust role in current quest for peace in Afghanistan is a proof of our goodwill.

He pointed out that our close collaboration and crucial support for peace process has led to the historic engagement between the Taliban and the US and paved the way for Intra Afghan dialogue.

He said Pakistan will continue to emphasize on a sustained and inclusive peace process for the betterment of people of Afghanistan and the regional peace.

The COAS said Pakistan has also undertaken unprecedented steps to enhance Afghan trade and connectivity by reenergizing Afghan-Pakistan transit trade agreement and also providing access to Afghanistan to export its goods to India.

He said our efforts for peace in Afghanistan and responsible and mature behaviour towards India manifests our desire to change the narrative of geo political contestation to geo economic integration.

General Qamar Javed Bajwa said Pakistan’s long campaign against terrorism and extremism also manifests our resolve and national will. He said we have come a long way and yet we are a bit short of our final objective.

But we are determined to stay the course.

The Army Chief said Pakistan has begun to work towards sustainable development and improving economic conditions of underprivileged areas.

He said Pakistan Army has contributed immensely towards this national cause by rebuilding and mainstreaming some of the most neglected areas through massive development, besides ensuring peace and security.

The Army Chief said the CPEC has been at the heart of our economic transformational plan. He said we have made sincere efforts to make the mega project inclusive, transparent, and attractive for all global and regional players with the aim of bringing its benefits to everyone.

He said expansion in the political diplomacy is of vital importance for the economic development.

He further said we are also working on the policy with regard to the economic sector.

Moeed underlined the need to expose those who are involved in negative propaganda against Pakistan.