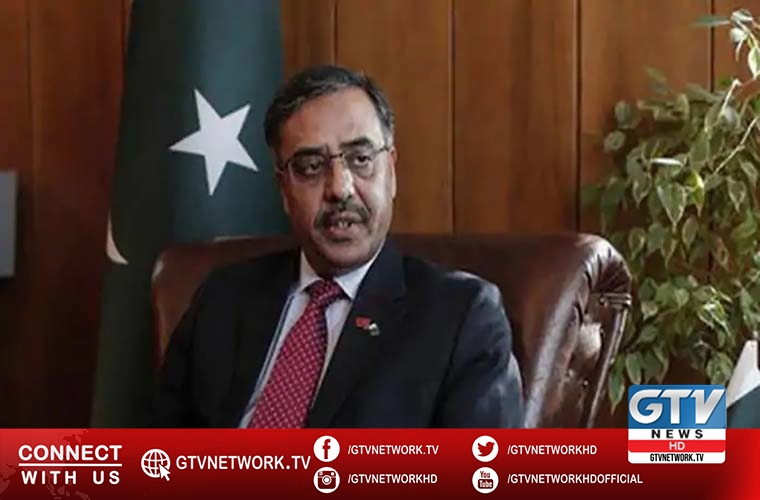 The conference held under the Presidency of Brazil on Wednesday.

Sohail further said the negative developments in international security landscape were casting their shadows in South Asia, where Pakistan faced a growing threat from conventional and nuclear arms build-ups.

“The threats to strategic stability in South Asia are accentuated by the nuclearization of the Indian Ocean, increase in diversity, numbers, ranges and readiness of delivery systems for both conventional and nuclear weapons, tests of hypersonic delivery vehicle, acquisition of anti-ballistic missile systems and long-endurance unmanned aerial vehicles,”

The foreign secretary said, “In March 2019, we saw a demonstration of anti-satellite weapons capability in our neighbourhood, when a missile defence interceptor was used to destroy a satellite in a low earth orbit and creating debris in the process.”

The development, he said, “once again highlighted Pakistan’s concerns on the military spin-offs of provision of high-end technologies to one country in our region by certain states, side-stepping global non-proliferation rules and creating discriminatory exception to export control regimes.”

“These destabilizing developments assume a dangerous dimension against the backdrop of continuing illegal occupation of Jammu and Kashmir, violations of the fundamental human rights of the Kashmiri people, and continued attempts at changing the demographic structure of the occupied territory in violation of international law and the relevant UN Security Council resolutions,” he added.

The foreign secretary further said Pakistan expected the outside players to be mindful of their responsibility not to further accentuate military imbalance and carefully review the impact of their geo-political strategies on strategic stability in South Asia.

He emphasized that peace and stability in South Asia could not be achieved without resolving the underlying disputes; without agreeing on reciprocal measures for nuclear and missile restraint, and risk reduction; and without instituting a balance between conventional forces through a sustained process of dialogue and confidence building.

“Our proposal for establishing a strategic restraint regime in South Asia is geared towards achieving these objectives. However, it needs a willing partner,” he remarked.

The foreign secretary reaffirmed the significance attached by Pakistan to the CD as a vital organ of the multilateral security architecture.

“We remain committed to its effective functioning. However, that will require political will to revive global consensus on pursuing arms control and nuclear disarmament on the principles outlined by SSOD-I (Special Session on Disarmament),” he maintained.

The foreign secretary said a balanced, comprehensive and objective approach must permeate the CD’s work in its entirety for it to respond to international expectations.

“In doing so, this body can and must contribute to enhanced security for all at the lowest level of armaments,” he stressed.

He said that as the Conference was an indispensible part of the UN disarmament machinery, it had a unique role to advance the global disarmament and arms control agenda on a consensus-based approach.

“This body has successfully delivered important treaties and conventions,” he added.

The Foreign Secretary said that the current impasse in the CD was a reflection of the prevailing geo-strategic realities.

“Great power competition has re-emerged. Some states continue to pursue dominance including through expansion and up-gradation of their arsenals, accentuating risks of nuclear war. Militarily significant states have demonstrated little appetite for treaties which require compromises on their strategic advantages.These states are only willing to advance proposals which are cost-free for them,” he remarked.

The Foreign Secretary said that cumulatively, those trends and developments had led to a stalemate in the CD for over two decades now.

“The impasse goes beyond the CD. The First Committee and the UN Disarmament Commission have also been unable to make any headway on the arms control and disarmament agenda,” he added.

The Foreign Secretary said that at present, there were two major risks, which if left unaddressed, could quickly evolve into serious threats to global and regional stability.

“Firstly, at the strategic level, nuclear weapon systems are being modernized.

Simultaneously, destabilizing weapon systems such as the hypersonic systems and ABMs (Anti-Ballistic Missiles) are being deployed along with doctrinal innovations. These are some of the key drivers of insecurity and instability, both at the global and regional levels.

“Secondly, the nature of warfare is rapidly changing. This transformation is being accelerated by advancements in new technologies. Militarization and integration of cyber technologies, Artificial Intelligence, Big Data analytics, quantum computing with outer space are no longer science fiction. These technologies are being applied in real time. By affording more intrusion, speed, precision and lethality,these can threaten the core security interests of states thus introducing non-linear pathways of escalation to the strategic level,” he added.

Unfortunately, the Foreign Secretary said that the UN disarmament forums had failed to adapt their agendas to deal with these new global threats and remain stuck in anachronisms.

“The technology holders are averse to discussions about legally binding arrangements to prevent the weaponizationof new technologies. The debates in the CD, discussions in the OEWG and GGEs and elsewhere, on cyber security, point towards complacency in dealing with these urgent challenges,” he added.

Similarly, the Foreign Secretary said that the CD needed to take up in earnest negotiations on a legally binding treaty for the Prevention of Arms Race in Outer Space (PAROS) – one of the core issues on its agenda since its inception.

“Weaponization of outer space, threat or use of force against outer space objects, integration of ABMs with space assets and offensive doctrines and postures in outer space continue to constitute threats to space security, safety and sustainability,” he added.

Moreover, the Foreign Secretary said that the convergence between space-based capabilities and military uses of emerging technologies portended new and grave dangers to security and deterrence stability on earth.

“The CD has to act now to prevent outer space from becoming a new realm of conflict,” he added.

The Foreign Secretary said that the developments he had just highlighted generated new types of nuclear risks besides impacting global and regional security in other ways.

“This underscores the priority of dealing with nuclear risks and dangers under the agenda item Prevention of Nuclear War. It would be useful to look at a new paradigm that includes risk reduction across various domains including conventional, nuclear, space and emerging technologies, whether they are specifically weaponized or not,” he added.

The Foreign Secretary further said that “The raison d’etre of the CD is nuclear disarmament. The CD must advance nuclear disarmament by addressing the underlying security concerns that drive states to rely on nuclear weapons for self-defense. It is regrettable that,for several decades,no serious work has been done in this direction, either at the regional or global levels.”

He said the issue of conventional asymmetries was neither being accorded due attention through the Convention on Certain Conventional Weapons (CCW) nor the existing treaties and conventions.

The priority has remained on prohibitions and restrictions on select weapon systems from humanitarian dimensions alone, he added.

The Foreign Secretary said that the Arms Trade Treaty (ATT) was a missed opportunity as it did not address questions of military balance and asymmetries especially in the regional and sub-regional contexts.

Given the direct and causal relationship between conventional weapon asymmetries and reliance on nuclear deterrence, the issue of balanced reduction of armed forces and conventional armaments deserved the attention of CD as part of its comprehensive and balanced programme of work, he added.

He said, “Equal attention has to be devoted, in parallel, to the need for reviving and strengthening international mechanisms for the resolution of internationally recognized disputes without which sustainable peace and security will continue to evade various regions of the world.”

The Foreign Secretary said that the Treaty on the Prohibition of Nuclear Weapons (TPNW) has had limited dividends, i.e. sensitizing the international community to the need for progress on nuclear disarmament, and reinforcing the ripeness of nuclear disarmament on the CD agenda.

“The TPNW has, however, fallen short of achieving its desired objectives. All nuclear weapon states and states under extended deterrence have refused to sign up.

“Pursuing nuclear prohibition in isolation has detracted attention from the underlying security concerns of the states, sidestepped festering international disputes, and failed to address asymmetries in non-nuclear military forces.”