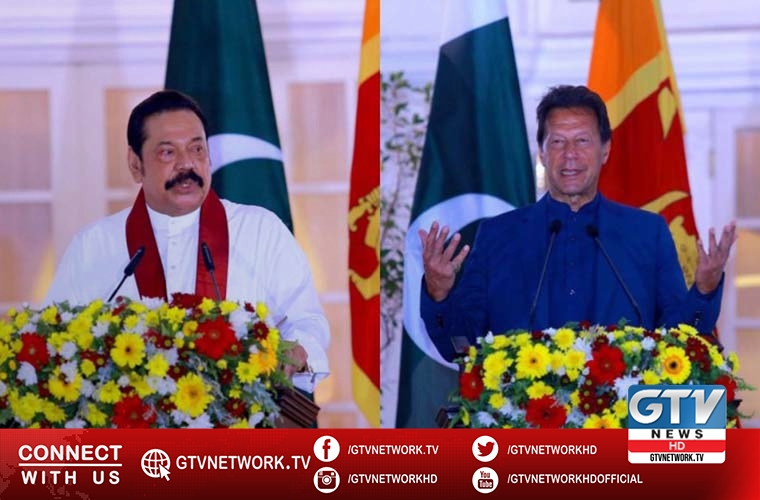 Prime Minister Imran Khan floated this idea, while addressing a joint presser, along with his Sri Lankan Counterpart Mahinda Rajapaksa in Colombo on Tuesday.

He emphasized on finding ways and means to enhance trade and connectivity through CPEC right up to Central Asia for Sri Lanka.

He mentioned Pakistan part of Belt and Road Initiative of China, while CPEC remains the flagship project of the BRI.

The PM further said this programme offers great opportunities of connectivity and trade.

Moreover, Imran Khan said we discussed areas where we can enhance trading ties between Pakistan and Sri Lanka.

He said Sri Lanka can get maximum benefit from the connectivity being offered by the former.

The Pakistan Prime Minister said his country and Sri Lanka share common problem of terrorism as both the countries have suffered a lot due to this menace.

He further said Pakistan faced a worst kind of terrorism for ten years and lost around 70,000 people.

Imran Khan said Pakistan played its part in helping Sri Lanka to curb terrorism from its soil, which was impeding development, growth, and the tourism.

He said no country can progress if there is terrorism.

He said now the two countries, along with other nations of the world, are facing another problem of Coronavirus.

The PM said the Covid-19 pandemic hit the poor countries the most and they should be entitled to get debt relief from the richer nations.

He said the Northern Areas of Pakistan was center of ancient Gandahara civilization in the region.

He also invited people from Sri Lanka to visit Pakistan as it is planning for a Buddhist trail to attract the Buddhist community from all over the world.

Imran Khan also thanked his Sri Lankan Counterpart for according a warm welcome to him and his delegation.

Meanwhile, Mahinda Rajapaksa said we have agreed to enhance bilateral ties in the fields of economy, trade, investment, education, defence, tourism, aviation and other sectors.

Mahinda Rajapaksa said we have agreed to work together to fight terrorism and armed struggle through sharing of information.

He said political stability and regional peace will be a key to achieve a sustainable development, economic growth and prosperity in South Asia.

He also acknowledged Pakistan’s support to curb terrorism from Sri Lankan soil and thanked Islamabad for its cooperation in the realm of sports.