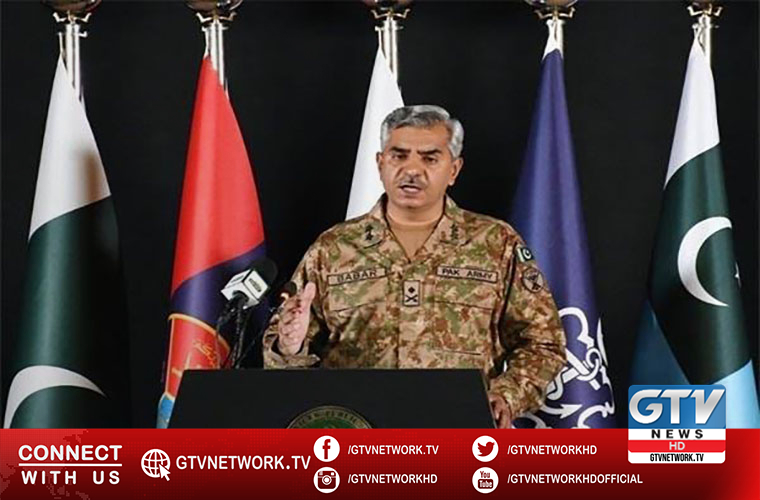 He laid emphasis on this, while addressing a press conference in Rawalpindi on Monday.

The ISPR’s head briefed reporters about achievements in counter-terrorism measures which the security forces made in recent times.

However, he said this operation was not area-specific.  But its domain extended to the entire country.

Every Pakistani a sepoy of Raddul Fasaad

Maj Gen Babar Iftikhar said that the strategic intent of Raddul Fasaad aimed at a peaceful, stable and normalized Pakistan.

He elaborated that it aims at a Pakistan where people’s confidence in the state is restored and terrorists and extremists are rendered completely ineffective by curtailing their freedom of action.

In this regard, the DG ISPR also highlighted the role of the public in security operations.

He further said that while armed forces fight terrorists, terrorism and extremism can only be defeated by the civil law enforcement agencies and society as a whole.

He said that the whole of nation approach means every Pakistani is a sepoy of Raddul Fasaad.

Moreover, he said the operation had begun at a time when terrorists attempted to take refuge across the length and breadth of Pakistan.

The security forces had destroyed their infrastructure in the tribal areas and they had suffered heavy losses in various operations.

He said that the basic cardinals of the counterterrorism plan were that the use of power is the privilege of the state only; stability on the western zone through an effective border management system; and ending terrorists’ support base across the country.

DG ISPR also elaborated how they countered violent extremism under that strategy.

He further said it is clear that an ideology can only be countered by a superior ideology.

Their efforts involved implementation of the National Action Plan, bringing the tribal areas into the national mainstream.

Besides, it focused on curbing extremist activities through assisting the government in educational, madressah and police reforms.

He said Pakistan’s “grand strategy” in its war against terrorism based on four concepts: “Clear, hold, build and transfer.”

Between 2010 and 2017, various areas were cleared of terrorists after major operations as per the ‘clear and hold’ phase and the writ of the state was being restored in the tribal areas, the DG ISPR said.

“Raddul Fasaad was the beginning of the build and transfer phase. During this, it was our responsibility to make hard-earned gains irreversible. This would be the real measurement of success against terrorism.

After clearing an area [through] kinetic operations, socio-economic uplift and the functioning of civil institutions is the right step towards lasting peace.”

He said in the past four years, more than 375,000 intelligence-based operations (IBO) were carried out under Raddul Fasaad in which the CTD, IB, ISI, MI, police, FC and Rangers all played a role.

“They include some major and important IBOs as well which helped in curbing urban terrorism and many terrorist networks were broken,” Maj Gen Iftikhar said.

Citing some of the major IBOs carried out by security forces, he said the terrorists involved in the attack on a private hotel in Gwadar were killed in Balochistan; a suicide attack on an agricultural university was foiled in Khyber Pakhtunkhwa; and the attacks on the Pakistan Stock Exchange and the Chinese consulate in Karachi were foiled in Sindh.

“In these four years, more than 5,000 threat alerts were issued and the majority of them were neutralized before they materialized.

During Raddul Fasaad, the Khyber-IV operation was also carried out, which was aimed at clearing the Rajgal valley and making the Afghan border safe,” he said, adding that last year in August, an operation was carried out in North Waziristan in a “most inhospitable terrain”.

A lot of progress was also made under Raddul Fasaad regarding deweaponisation and explosives control, the DG ISPR said, while adding that more than 72,000 foreign weapons and more than five million rounds of ammunition were seized from across the country.

He spoke on the security situation over the last few years.

He said about 1,850 incidents of terrorism took place from 2017-2021, while 1,684 cross-border firing incidents took place on the Pak-Afghan border.

During this period, 353 terrorists were killed and several were arrested as part of Raddul Fasaad, he told the presser.

The DG ISPR said that a lot of attention was given to capacity enhancement [of LEAs] from 2017-21; 58 new wings of FC have been established and 15 are yet to be set up.

Moreover, he said that work on the Pak-Afghan border fencing is 84 per cent complete, while on the Pak-Iran border more than 43pc work has been done. Additionally, 497 border posts and terminals have been built.

He said an integrated transit trade management system was being installed at Torkham and Chaman borders which would be operational in about two years.

Maj Gen Iftikhar said that in In the tribal districts about 72 per cent of the area has been cleared in demining efforts.

He further noted it very painstaking and slow process and two of our soldiers have been martyred during it, while 119 have been injured.

More than 48,000 mines had been recovered during the operation so far.

He further said the checkposts built at the start of military operations were being reduced after their conclusion as the situation moved towards normalisation.

“In these four years, security forces have trained more than 37,428 policemen across the country and in the next six months about 4,000 more will be inducted in tribal areas’ police force after training.

In Balochistan, the Pakistan Army has trained 3,865 Levies personnel.

And this year more than 3,500 Levies officials’ training is underway.

H further said that nearly 96pc of the people in Temporarily Displaced Persons camps had returned home as a result of a well-rounded strategy.

The DG ISPR also spoke on the steps to curb extremism and terrorism under NAP.

He said 717 cases were referred to military courts which were established to punish terrorists.

As many as 344 terrorists were awarded death sentences out of which the sentences of 58 convicts have been carried out.

106 were sentenced to life in prison and 195 terrorists were awarded imprisonment of different terms. Five suspects were acquitted.

He noted freezing of their assets and limiting their activity.

Besides, they controlled money laundering, extortion, and kidnapping for ransom through an effective strategy.

He said more than 1,200 sub-nationalist extremists had laid down their weapons.

Besides, they and committed themselves to peace from 2017 till date.

He noted restricting hate speech and extremist material, they also made terrorists’ narrative and its propagation ineffective effectively.

Notably, with consultation from the Wafaqul Madaris and ulema, more than 1800 religious leaders united for the first time to present an effective narrative against extremism.

Meanwhile, DG ISPR also spoke on Paigham-i-Pakistan. He said it has actually saved youth from going towards terrorism in the name of Islam.

Furthermore, he said it also helped curbed sectarianism and to a large extent defeated extremist narrative.

Maj Gen Babar said that in Gilgit-Baltistan and Balochistan, hostile intelligence agencies’ plan to mislead our youth against Pakistan foiled.

Especially it it through presenting irrefutable evidence” of their aid and training to terrorists in front of the world.

Credit goes the operation that the law and order situation in Karachi has improved greatly.

The govt launched development projects in KP as well as Balochistan.

And that progress came, apart from the China-Pakistan Economic Corridor.

DG ISPR said the path from terrorism to tourism was very tough and tiring.

He further said that the areas that were once a target of terrorism had economic activity now.

“We have come a long way but I must say that we have a lot of ground to be covered. We can only cover it by remaining united.”

The DG ISPR said Pakistan was adapting to the changing environment.

Besides, they are working on the new challenges that come in the domain of hybrid war and fifth-generation warfare.

He announced that a parade will be held next month on the occasion of Pakistan Day in which the Pakistan Army will participate.

Meanwhile, he also spoke on other issues.

He said the international community had responded “very positively” to the dossier which Pakistan unveiled regarding Indian sponsorship of terrorism in Pakistan.

Maj Gen Babar Iftikhar said that they took it seriously at every forum.

He noted that many international organisations had lately issued statements and documents that proved that the dossier was being taken seriously.

Moreover, the the DG ISPR replied to a question on the Financial Action Task Force (FATF) plenary beginning today.

The FATF would decide about keeping or removing Pakistan from its grey list.

Maj Gen Babar Iftikhar said that the FATF worked according to a procedure.

He further said Pakistan had done a lot of work to meet the FATF recommendations and its progress was acknowledged at every forum.

He said acknowledgement of progress is there on every forum, and will be on this forum as well. There is lobbying as well; every time we go a lobby starts working against us.

On the Afghan peace talks, the DG ISPR said the process was moving forward in a positive direction.

He thinks that so far, everyone is listening to everyone and it’s progressing in a positive direction.

However, he noted hurdles in between but they overcame hurdles before and expressed certainty they will also overcome in times to come.

However, he made clear that Pakistan had no favourites in the peace process.

He said Pakistan’s only interest in the Afghan peace process is solely for the sake of peace in Afghanistan.

Pakistan pursues this policy because of its belief that peace in Pakistan remains absolutely connected to peace in Afghanistan.