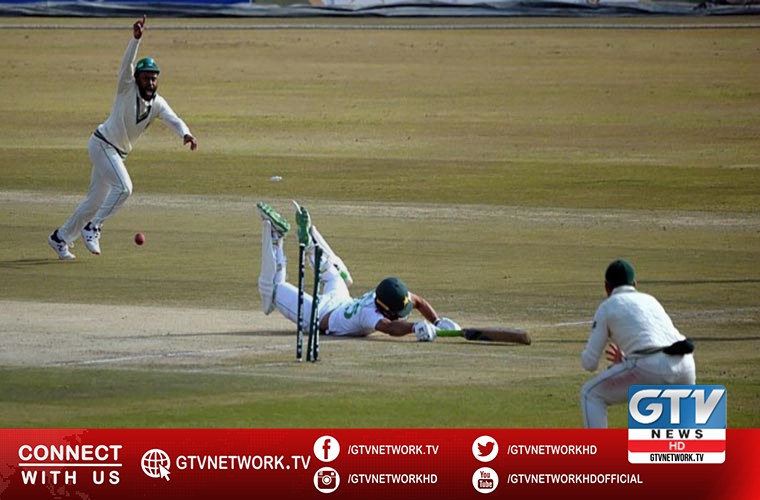 Pakistan scores 272 runs in the first innings of second Test against South Africa at the Pindi Stadium on Friday.

Pakistan scores 272 runs in the first innings of second Test

Faheem took Pakistan out of trouble as the Green-shirts had lost skipper Babar Azam and Fawad Alam early in the morning. He scored 78 off 160 balls, including 12 fours.

Pakistan started the day with 145 for 3 on the board but could not maintained the grip as wickets fell just like the visitors wanted. Anrich Nortje dismissed Babar on the second ball (58.2 over) of the day. The prolific batsman edged to Faf du Plessis, one of the best fielders in the cricket world, at second slip, when he was 23 runs away from hundred (77).

The second big wicket of Fawad downed in the 63.4 over as he was run out by Temba Bavuma.

He tried to scamper a single by knocking the ball to the off side, but it was picked up by Bavuma, who threw it in the same action which directly hit the stumps at the bowler’s end. Fawad was on 45.

Wicket-keeper batsman Mohammad Rizwan’s (18) was the third wicket of the morning session. Nortje hammered in the short ball and Rizwan tried to hook it.

He, however, top-edged the ball and was caught by Kagiso Rabada in the 82nd over. Pakistan were 229 before lunch. They lost Hasan Ali ( 8) in the 93.2 over as he was caught by Dean Elgar on the ball of Keshav Maharaja .

Then the eighth wicket of Yasir Shah was lost for only 8 runs.

He was taken by Wiaan Mulder in the 102.4 over. Nauman Ali (8) and Shaheen Shah Afridi (0) also did not stay for long at the crease and went in the 115th over of Anrich Nortje.

The start of visitors’ innings was also bad as they lost two early wickets to pacer Hasan Ali, who made his comeback in the team with a blast. Hasan struck in the 6th over of the second innings and dismissed two back-to-back wickets of Elgar (15) and Rassie van der Dussen (0).

Hassan last played for Pakistan in June 2019. A combination of bad form and injuries seemed to have put on hold his career as he has so far taken 150 international wickets. He was the top ranked bowler in the ICC ODI Player Rankings in 2017 and was also the player of the tournament in the Champions Trophy of the same year.

The Proteas lost their third wicket of Faf du Plessis (17) in the 15th over bowled by Faheem. He tried to cut the ball but got a thick edge, and was taken by wicket-keeper Rizwan.

Spinner Nauman Ali also took a wicket in the 24th over by dismissing Aiden Markam on 32, who was trying to settle down.

However, South Africa managed to score 106 runs for four in 28 overs and trailed by 166 runs at end of the second day.

On his superb display in the first innings, Faheem Ashraf said in a virtual press conference after the match that he would call himself a bowling all-rounder even if it was the end of his career.

“I am playing as a bowling all-rounder and batting is my plus point. I thank God, as my hard work was paying off. The pitch was supporting both batting and bowling,” he said and added that the Pindi wicket was hard but there was less grass on it and the outfield was very fast.

To a question on his Test century as he remained unbeaten on 78 runs in the first innings, he said he was hopeful that he would achieve the feat. “I believe if it is in my destiny then I will get it.”

The captain was backing spinner Yasir Shah and was telling him not to take any pressure, he added.

Faheem said he worked on his bowling everyday and tried to maintain the pace of 135 to 137 kph.

Meanwhile, Anrich Nortje said there was a bit bounce on the wicket as compared to the last game. On bagging five wickets for 56, he said performance in the subcontinent meant a lot to him.

“Before coming into the series I improved my line and length and we tried to dig in as much in the first innings,” he said.

Pakistan Hockey Federation to get Rs50m out of army welfare fund