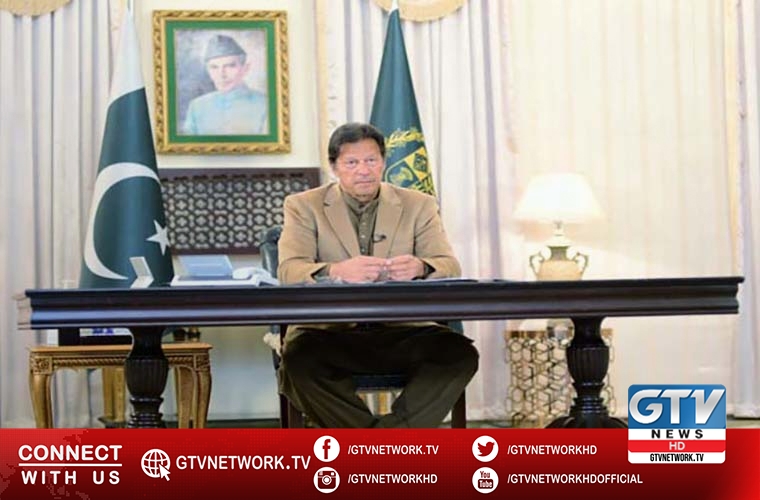 He stressed the need for holding the influential and powerful people accountable.

Moreover, the PM underlined it as important to uplift the country.

He said  the country cannot be taken forward and achieve prosperity without effective rule of law.

He said the alliance of opposition parties has come together and is pressurizing the government over the last two and a half years to get an NRO.

However, he said that giving an NRO to the corrupt elements will be tantamount to treason with the country.

He said we are paying the price of the NRO given by former President Pervez Musharraf to the corrupt leaders.

The Prime Minister said the Broadsheet exposes the whole saga of corruption.

He said former Judge of Supreme Court Justice retired Azmat Saeed who has the relevant expertise, has been entrusted the responsibility to probe into the matter and bring the facts before the public.

Furthermore, he said a crackdown has also been started against the land grabbers to recover the official and private lands from this mafia. He said laws will also be enacted to wage a war against the land mafia.

Moreover, he answered a question about the lack of civic amenities in Hyderabad district of Sindh.

The PM further said all the powers have been delegated to the provinces after the passage of 18th amendment and it is now their responsibility to look after the development work.

He also regretted the malpractices in the Senate elections.

Furthermore, he said the government is bringing a constitutional amendment in the National Assembly this week to hold the elections of upper house through open ballot.

He said the nation will itself witness as to who does not want an end to buying and selling of votes in the elections.

He recalled that it was the PPP and the PML (N) which had committed through the Charter of Democracy to hold the Senate polls through open ballot.

Responding to a caller, the Prime Minister said the Election Commission of Pakistan should take the case of foreign funding of political parties to its logical conclusion. He said the opposition parties have no record of donors.

PDM, Fazl and others

He said PTI is the only party which has transparent record of its donations.

When asked about the inflation, the Prime Minister said the government is fully cognizant of the problems being faced by the people due to price hike.

He, however, said he is regularly holding meetings on the issue, and the consumer price index has now started witnessing a decline due to the policies of the government.

The Prime Minister said the exports and remittances have also witnessed a major boost in recent months. As a result, we have managed to balance the current account surplus for the last five months.

He said the flow of dollars in the country will stabilize the local currency and also help address the issue of inflation.  He expressed the commitment to overcome the issue of price hike.

Highlighting the great potential of edible oil production in the country, the Prime Minister said a major olive plantation drive will be launched this month to bolster domestic production of this fruit.

He was confident there will be olive revolution in the country which will not only promote the healthy food but also help save precious foreign exchange currently being spent on its import.

Furthermore, he said a boom is being witnessed in the construction and industrial sectors which are providing job opportunities to the people.

The Prime Minister said textile industry is operating at its fully capacity.

Alluding to the losses of State Owned Enterprises, the Prime Minister said the present government is determined to revamp them and run on modern lines.  He said PIA will be turned into a professional and profitable entity.

He said it is effort of the government to administer anti-covid vaccine to the whole population during the current year.

He said our policy is to administer the vaccine to the frontline health workers in the first phase.

In the next phase, the vaccine will be given to those above sixty years of age or faced with some serious illness.

He assured the vaccine will be administered as per the laid down criterion without any discrimination.

The Prime Minister said the State of Madina was based on modern concepts such as rule of law, meritocracy and protection of human rights.

He expressed the commitment to build Pakistan on the principles of State of Madina as there is no other way.

The PM further said Pakistan is on the course of becoming a great nation by pursuing that path.

He said the subject of Seerat un Nabi (SAW) will now be taught in the classes of seven, eight and nine in order to orient students of the life and teachings of Holy Prophet Hazrat Muhammad Sallallaho Alaihe Wa Sallam Khatim un Nabiyeen.

Prime Minister Imran Khan was appreciative of the fact that the Khyber Pakhtunkhwa has expanded the health insurance scheme to the whole population.

He said Punjab government is also working to provide universal health coverage to the whole of province by the end of this year.

On Kashmir dispute, the Prime Minister voiced concerns over the grave human rights situation in Indian illegally occupied Jammu and Kashmir and LOC violations in which a number of innocent people have been martyred and injured.

He said he has raised the issue at every international forum to sensitize the world community about the gravity of the situation.

He said he will also talk to the new US President Joe Biden to urge him to pressurize India to stop its campaign of oppression in the occupied territory.

On Kashmir solidarity day being observed on Friday next, Imran Khan said he will address a public gathering in Kotli to express solidarity with the oppressed Kashmiri people.

When asked about Islamophobia, the Prime Minister stressed all the Muslim countries will have to unitedly raise voice to address the issue.

He said he has also written letters to the heads of Muslim countries in the wake of France incident.

He said under the garb of freedom of expression, the western countries are hurting the sentiments of Muslims.

Backward areas of the country

To a question, the Prime Minister said developing backward areas of the country, including Balochistan and tribal districts, is the foremost priority of the government.

He said we have given a historic package for the development of South Balochistan and it envisages a whole range of different projects including those related to connectivity.

He said we have also decided to provide 3G and 4G facility in these areas to bring improvement in the living standards of the people there.

The government has also launched a policy of concessionary loans, so that people could build their own houses.

Responding to a question about Gilgit Baltistan, the Prime Minister said the government will make all out efforts to turn this region into a tourism hub.

He said several projects have been envisaged for this purpose which will bring prosperity in the lives of the people.

He said a grid station and small hydro power projects will be established in Gilgit Baltistan to address its electricity issues.

The PM said road infrastructure projects will also be executed to open the region for tourism.

About cricket, the Prime Minister said our effort is to promote cricket at the regional level.

He was confident that the performance of our national team will also improve in the days to come.

US indicts 5 Pakistanis over illegal exports for Pakistan nuclear program