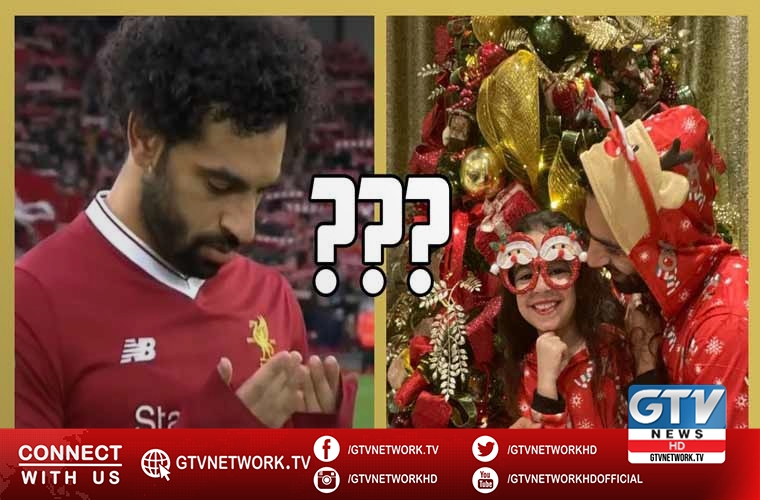 Liverpool football and Egypt’s forward Mohamed Salah has been subjected to fierce online anger from fans.

Those fans seem to have become unhappy after the Muslim star and his family shared a Christmas message.

Salah, 28, posted images to his social media following of more than 50 million.

He featured himself and his family dressed in festive attire sitting in front of a Christmas tree.

Moreover, he added two emojis and the hashtag #MerryChristmas.

Salah has 16 goals in 21 appearances for Liverpool this season.

He typically performs sujud, the Islamic prostration, after each of his goals in gratitude to God.

“As a Muslim, we should not celebrate or even congratulate other religions in their celebrates that’s all,” read one reply.

However, the positivity of Salah’s message was overshadowed by those who angrily asserted that the Muslim star should not be seen celebrating Christmas.

“That’s why [Arsenal and Egypt player] Mohammed Elneny is the Egyptian king & not u,” read another spite-filled response.

I live in Dubai and Xmas trees in all the malls, Xmas songs in all the shops, Xmas markets everywhere and that’s in a Muslim country, imagine that but intensified times 100 in the UK, is he really gonna deprive his daughter of all that joy & hapiness her friends are experiencing?

The barrage of criticism, though, saw some netizens hit back with sharp counters.

“There are people dying of hunger, shot in wars, unspeakable atrocities..but God will be like lemme holler at Salah for wearing a Christmas outfit,” said one.

And another shot back with a sarcastic response.

Many, however, defended Salah’s message of peace and love, with one person writing: “If you’re crying under this tweet pls cry in English. Save us the stress of translating.”

One tweeted, “Any Muslim who have a problem with this doesn’t understand his faith, so I would be his problem not Islam problem.”

“I live in Dubai and Xmas trees in all the malls, Xmas songs in all the shops, Xmas markets everywhere and that’s in a Muslim country, imagine that but intensified times 100 in the UK, is he really gonna deprive his daughter of all that joy & happiness her friends are experiencing?” read another.

very interesting arabs could not make a sound to this picture but salah is criticized pic.twitter.com/2TZGybfiZ0

The three pictured at Riyadh Summit in May 2017 shortly after Trump took office.