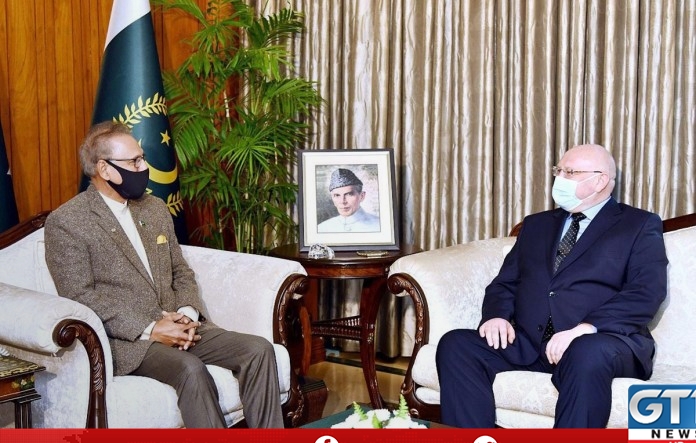 Andrei Ermolovich met him at Aiwan-e-Sadr in Islamabad.

He said Pakistan want to further enhance bilateral relations in all fields of mutual interest.

Moreover, he remarked that both countries had great potential of cooperation in the areas of culture, tourism and pharmaceuticals.

He stressed the need for increasing cooperation in these areas for mutual benefit of both the countries.

He expressed the hope that the Memorandum of Understanding (MoU) signed by the two countries on cooperation in the field of education would greatly help in strengthening cultural linkages.

Meanwhile, congratulated Andrei Ermolovich on successful completion of his tenure as ambassador.

He also expressed confidence that he would continue to promote Pakistan-Belarus relations.

In a tweet, Dr. Arif Alvi lauded the courage of Kashmiri people.

He said Kashmiris have exposed the Indian brutalities in Indian Illegally Occupied Jammu and Kashmir (IIOJ&K).

Furthermore he said undeterred by total shutdown of Social Media and torture, Indian brutalities will continue to be exposed in occupied territory.