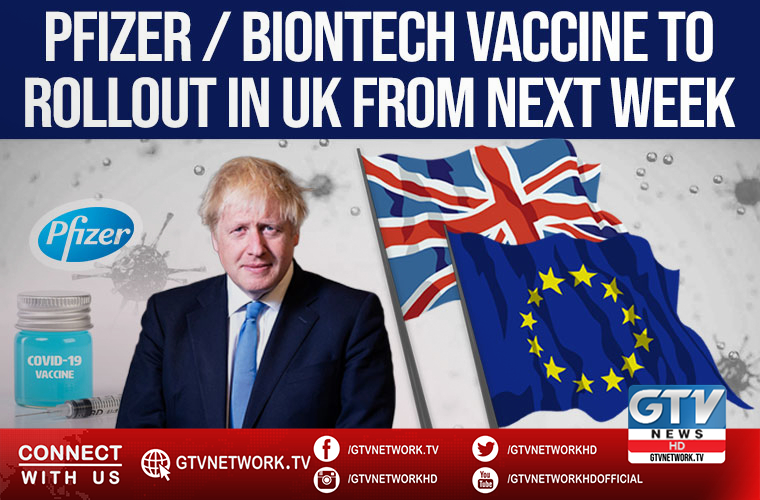 The UK has become the first western country to license a vaccine against Covid, opening the way for mass immunization with the Pfizer/BioNTech vaccine to begin next week for those most at risk.

Prime Minister Mr Boris Johnson tweets: “It’s the protection of vaccines that will ultimately allow us to reclaim our lives and get the economy moving again.”

Health secretary Matt Hancock said “I’m obviously absolutely thrilled with the news. I’m very proud that the UK is the first place in the world to have a clinically authorized vaccine ready to go,”

The vaccine is given as two injections, 21 days apart, with the second dose being a booster. Immunity begins to kick in after the first dose but reaches its full effect seven days after the second dose.

Most of the side effects are very mild, similar to the side effects after any other vaccine and usually last for a day or so, said Prof Sir Munir Pirmohamed, the chairman of the Commission on Human Medicine expert working group.

The UK has been promised 40 million doses by the spring – enough to give the required two jabs to health and care workers and everyone over 65. Uk will have 800,000 doses in the country within days – with several million more to follow in weeks.

The head of the MHRA(Medicines and Healthcare products Regulatory Agency), Dr June Raine, said despite the speed of approval, no corners have been cut. Batches of the vaccine will be tested in labs “so that every single vaccine that goes out meets the same high standards of safety”.

On the other side U.S. Food and Drug Administration (FDA) will make a decision on emergency use authorization on the Pfizer/BioNTech vaccine in days or weeks after a panel of outside advisors meets on Dec. 10 to discuss whether to recommend it. The FDA often but not always follows the panel’s advice.

The European Medicines Agency plans to convene a meeting by Dec. 29 to decide if there is enough safety and efficacy data about the vaccine developed by Pfizer and BioNTech for it to be approved.

Health Minister Matt Hancock said, “until earlier this year we were in the European Medicines Agency [EMA], because of Brexit we’ve been able to make a decision to do this based on the UK regulator, a world-class regulator, and not go at the pace of the Europeans, who are moving a little bit more slowly”.

His claim is however denied by June Raine, chief executive of the MHRA, said “We have been able to authorize the supply of this vaccine using provisions under European law which exist until 1 January.”

German health minister Jens Spahn said after a meeting of EU health ministers: “The idea is not that we’re the first, but the idea is to have safe and effective vaccines in the pandemic and that we can create, confidence, and nothing is more important than competence, with respect to vaccines that trust in vaccines is important.”

Upon approval of Pfizer vaccine in UK, the response of key government figures was met by blunt answer from Germany.It started from Matt Hancock to Alok Sharma. As UK Business Secretary Alok Sharma tweeted, “In years to come, we will remember this moment as the day the UK led humanity’s charge against this disease”.

“I really don’t think this is a national story. In spite of the German company BioNTech having made a crucial contribution, this is European and transatlantic,” German ambassador to the UK Andrea Michaelis said.

President Trump State of the Union address on Feb 04