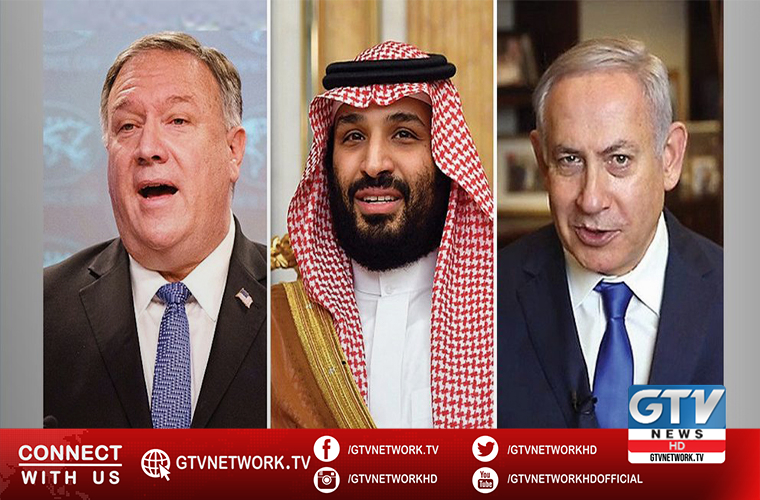 “The very fact the meeting happened, and was outed publicly, even if half-officially right now, is a matter of great importance,” Education Minister Yoav Gallant told Army Radio when asked about the visit.

A member of Netanyahu’s cabinet and Likud party on Monday confirmed reports.

They said the Israeli leader had held a meeting in Saudi Arabia, calling it an “amazing achievement”.

However, Faisal bin Farhan al-Saud, Saudi Arabia’s foreign minister, denied reports that a meeting took place between MBS and Israeli officials. He rebuffed the news in a tweet later on Sunday.

Sunday’s meeting, if happened, would mark the first known encounter between senior Israeli and Saudi officials, amid a US push to convince Arab countries to normalise ties with Israel.

Netanyahu’s office and the US embassy to Israel had no immediate comment.

According to Israeli daily Haaretz, aviation tracking data showed that a private jet had made a brief trip from Tel Aviv to Neom, where MBS and Pompeo had a scheduled meeting on Sunday.

Flight-tracking websites showed that the plane was grounded for approximately two hours before it returned to Israel about half an hour past midnight.

The jet, according to Haaretz, is the same private plane Netanyahu took several times for his visits to Russian President Vladimir Putin.

Pompeo has tried to coax the Gulf powerhouse to follow its neighbours, the United Arab Emirates (UAE) and Bahrain, in establishing formal relations with Israel – a rapprochement built largely on shared concerns over Iran.