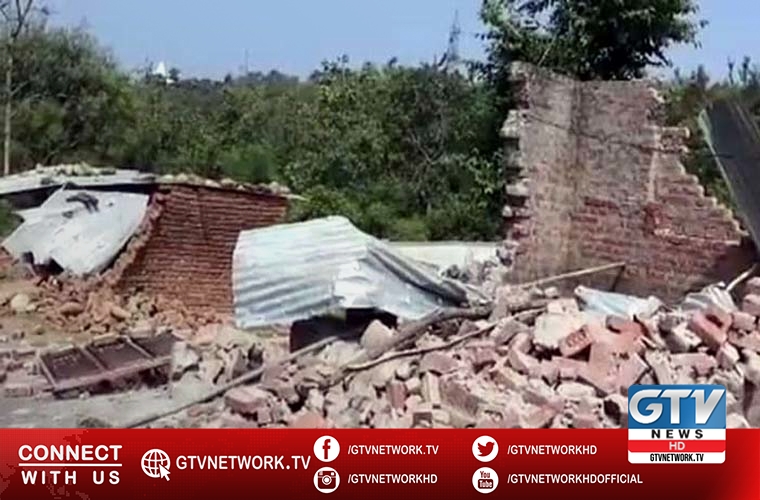 The authorities demolished scores of houses, huts and sheds belonging to Gujjar and Bakarwal communities of Muslims in Pahalgam, Islamabad and Bhatandi.

Reports had it they would grab their land to settle Hindu outsiders there.

The inhuman act against IIOJ&K Gujjar and Bakarwal communities on part of Modi government was exposed during a visit by former Chief Minister and PDP President Mehbooba Mufti to upper reaches of Pahalgam in South Kashmir.

She also addressed the affected Muslim communities in Pahlgam.

She said that “This land belongs to these nomads who are living here for centuries.

Majority of them were shifted to COVID-19 infected jails in India.

The report said that thousands of Kashmiris languishing in Indian jails under fake cases are even denied medical facilities.

As pathetic conditions in Indian prisons make Kashmiri prisoners more vulnerable to COVID-19, New Delhi is not listening to world calls to release them.

While calling to free Kashmiri prisoners amid the growing threat of coronavirus, the report said that their families are concerned about their safety in Indian jails.

Kashmiri political prisoners are being harassed solely for political views and are being punished for demanding their right to self-determination.

Meanwhile, the All Parties Hurriyat Conference (APHC) spokesman issued a statement in Srinagar.

He accused India of depriving Kashmiri people of all their basic rights to maintain its illegal occupation.

Moreover, he said Indian government has enacted several laws including land and domicile laws to change the demography of the territory.