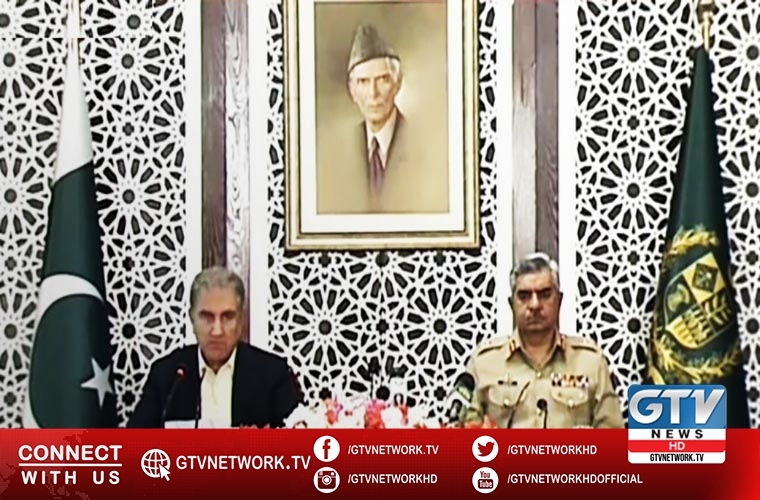 FM and DG ISPR unveil dossier on Indian terror sponsorship in Pakistan during a joint press conference they addressed in Islamabad today.

Foreign Minister Shah Mahmood Qureshi presented before the people of Pakistan and the international community a dossier carrying irrefutable evidence of India’s sponsorship of terrorism inside Pakistan.

Director General ISPR Major General Babar Iftikhar was sitting next to him.

The FM said India’s objectives of terror sponsorship in Pakistan include disruption of peace, destabilization of economy and political instability.

The Foreign Minister said Pakistan is going to present this dossier to the United Nations, OIC, P-5 countries and others.

He said we expect the international community to play its role for peace and stability by compelling India to immediately halt its state sponsorship of terrorism in Pakistan.

Furthermore, Qureshi said Pakistan expects world community to bring to justice all those involved in financing and supporting terrorism inside Pakistan.

For this he also referred to domestic and international laws.

The Minister said the international community can no longer turn a blind eye to this rogue behavior by a state that refuses to adhere to international laws and UN Conventions.

Shah Mahmood categorically stated that India’s efforts to foment terrorism inside Pakistan will not be allowed to undermine Pakistan’s stability in any way.

India a threat to peace in the region

He said India is a threat to peace in the region and the major powers must act to prevent India from continued sponsorship of terrorism against Pakistan.

The Minister said we reserve the right to defend ourselves in every possible way.

He said India has provided funding worth 22 billion rupees to these terrorist organizations in last three years.

He said the dossier carries evidence of Indian intelligence agencies’ funding and provision of weapons, ammunition and IEDs to target Ulema, notables and police officials in a bid to destabilize the country.

He said a Cell under the direct supervision of Indian Prime Minister Narendra Modi is working to sabotage CPEC.

Qureshi said so far 80 billion rupees have been allocated and a militia of 700 people has been raised to disrupt CPEC projects.

He said the dossier has exposed Indian plans and attempts to create unrest in Azad Jammu and Kashmir and Gilgit-Baltistan through sub-nationalist elements.

These documents as well as the audio and video clips show bank transactions, equipment support and the Indian intelligence agencies officials’ directions.

Indian intelligence agencies gave directives to the terrorists to carry out terrorist acts in various parts of Pakistan.

Moreover, DG ISPR said India has established multi-purpose terrorist base camps for training, harbouring and launching of terrorists into Pakistan.

He said Indian intelligence agencies are managing 87 such terrorists’ camps out of which 66 are located in Afghanistan whereas 21 are located in India.

The DG ISPR said it has been revealed that Indian intelligence agencies are trying to establish Pakistan’s linkage with ISIS(Daesh) by creating “Daesh-e-Pakistan.”

Furthermore, he said that India has also been providing weapons and ammunition to Altaf Hussain Group.

He said weapons worth 0.62 million dollars were provided to the group on one such occasion. Confessional statement of Ajmal Pahari validates it.