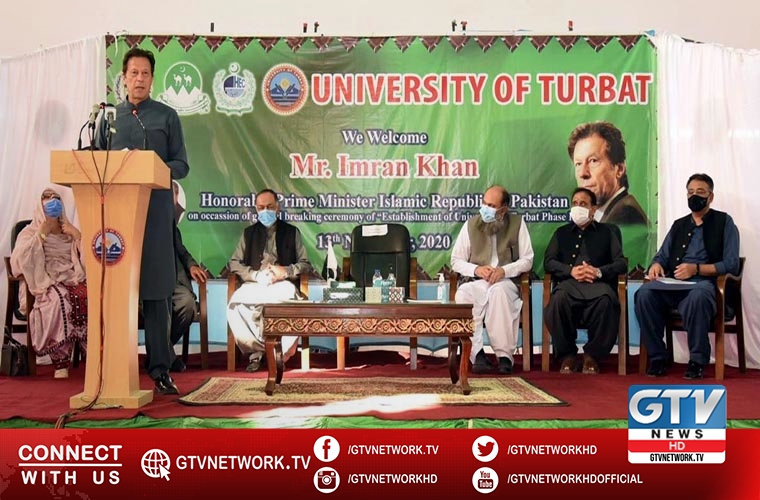 He said this, while addressing notables of South Balochistan in Turbat on Friday afternoon.

He said young people, especially students of the province, can take maximum benefit from fast internet facilities in the age of information technology.

The Prime Minister said under the Naya Pakistan Housing Scheme poor people can get loan from designated banks on five percent interest to have their own house.

Imran Khan said it is part of his faith that no nation can progress unless it lifts its weaker segments.

He said our objective to uplift Balochistan is not only limited to mere announcements of projects.

He said we will fully focus on the development and progress of Balochistan to bring the province at par with other parts of the country.

The Prime Minister said he is happy that Punjab Government has made an investment in education and health sectors of Balochistan.

He highlighted importance of China-Pakistan Economic Corridor for the development of Balochistan.

Imran Khan said Gwadar Port offers massive connectivity to China, which is the fastest progressing country in the world.

He said current volume of Chinese trade is around 2,000 billion dollars and Pakistan, especially Balochistan can benefit from this.

The Prime Minister said no loan in last four months was taken, while domestic market witnessed reord sale of cement, iron, and automobiles, which shows upward trajectory of country’s economy.

Relevant authorities briefed him about the progress on Basima – Khuzdar Road N-30 and Development Package for South Balochistan.

Meanwhile, the PM inaugurated the Daar-ul-Ehsaas for orphaned and poor children where free shelter, food and education would be provided.

Earlier, the Prime Minister Imran Khan addressed the youth in Turbat this afternoon

He said the government is focusing on promotion of education and health sectors in the province as investment in the human capital is vital for national development.

He said PTI Government is providing unprecedented funds for the development of Balochistan and less developed areas of the country.

The Prime Minister said that incumbent government has taken various steps for the development and prosperity of Balochistan in real sense.

He urged the students to focus on education and after completion of education they should come forward and play their pivotal role in progress and prosperity of the province and country.

The Prime Minister appreciated the Punjab Government for enhancing scholarships for Balochistan students from 135 to 360.

He said equal development of all the federating units is essential for a stronger federation.