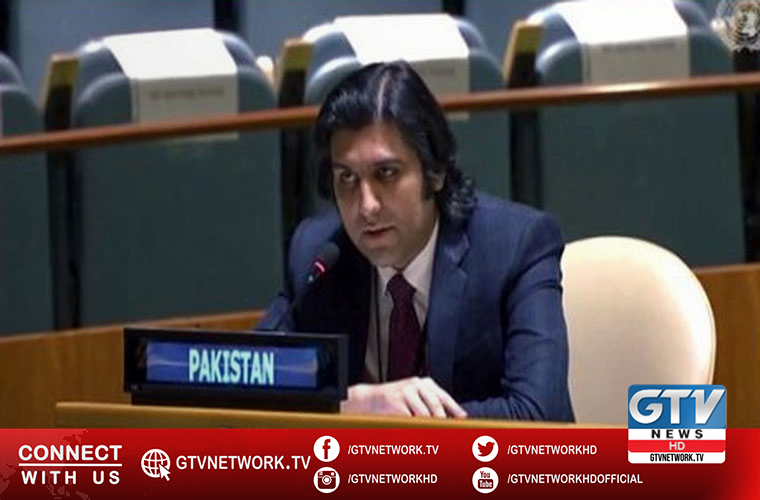 In this regard, Pakistani delegate Qasim Aziz told the General Assembly’s Third Committee, which deals with Social humanitarian and cultural issues.

Qasim Aziz voiced concern over rising Islamophobia in the world on Thursday.

He expressed views during a debate on the annual report of the 47-member Human Rights Council, which is based in Geneva.

He urged the UN Human Rights Council to take urgent steps to instill a better understanding of the dangers of incitement to hatred and discrimination based on one’s religion.

Pakistan delegate said that today, Islamophobia is unmistakable in the political manifestos of certain political parties and governments.

He lamented that they call for expulsion of Muslims, in the politicization and censorship of the hijab, in burning of the Holy Quran, in the deliberate vandalizing of Islamic symbols and holy sites.

He cited Islamophobia in attempts at incitement and provocations in the name of free speech through hurtful caricatures and competitions,”

Qasim Aziz said stoking such Islamophobic hysteria not only undermines the freedom of religion of Muslims but also poses serious challenges to the societal cohesion and democratic credentials of our societies.

Pakistan, he said, remained concerned by the global resurgence in intolerance, discrimination, racism, and violence against monitories and other vulnerable groups in many countries accompanied by extreme nationalism, xenophobia and aggression.

“Prejudice, discrimination and violence against Muslims, including Islamophobia, is one of the manifestations of these extremist trends,” Aziz, a second secretary in the Pakistan Mission to the UN, said.

Meanwhile, he reaffirmed Pakistan’s commitment to back efforts to make the Council more effective.

Furthermore, he expressed concern at some instances of politicization, double standards and selectivity, citing a recent resolution on “prevention mandate”.

(That resolution mandates the Council to prevent human rights violations before they ever occur, by building domestic rights capacity and resilience, with a focus on root causes.)

“Unfortunately,” Aziz said, “the proponents of the Council’s ‘prevention mandate’ conveniently overlook the relevance and applicability of this mandate to situations of foreign occupation and alien domination, which are rife with such pressing human rights emergencies.

“These situations, so recognized by Security Council resolutions, are a clear example meeting the objective criteria, articulated by those championing the cause of Council’s prevention mandate.”

“Yet,” he added, “we continue to witness with great disappointment that human rights merits, on the basis of which the HRC should take action in situations of foreign occupation, remain subservient to narrow political agendas.

“We, therefore, call upon the countries supporting the Human Rights Council’s ‘prevention agenda’ to demonstrate impartiality and for the sake of credibility, come forward in activating Council’s preventive actions on human rights merits and objective criteria, particularly in situations of foreign occupation and alien domination.”

Journalists protest against sealing of Kashmir Times office in IOJK