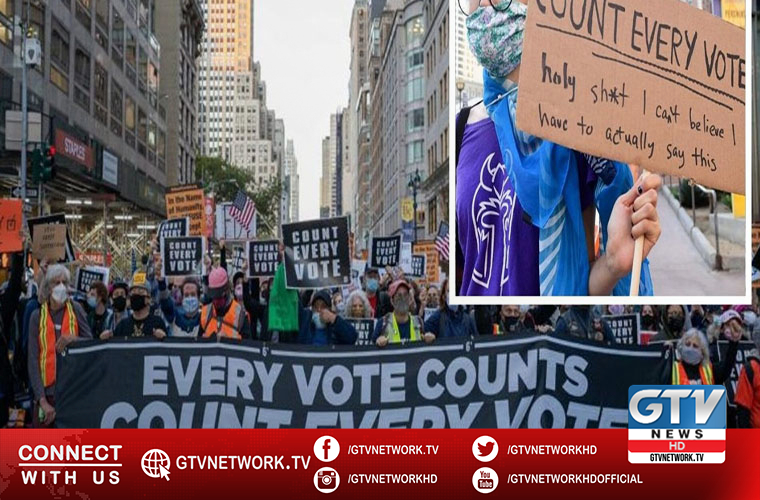 Americans come to streets to protest for complete vote count.

Protesters across the US, most aligned with Democrats and progressives, turned out on Wednesday evening and continue to protest now.

Americans come to streets to protest

They demand that officials “count every vote”, according to media reports.

Presidential race remained too close to call and ballots were still being tallied in key battleground states.
Organizers called it the “Protect the Results” rally.

Largely, the march remained peaceful, though police made at least 20 arrests after a smaller, rowdier group began protesting against police misconduct.

In Chicago, protesters demanding a complete count marched through downtown and along a street across the river from Trump Tower.

The demonstrations came as President Donald Trump threatened to sue his way to the presidency, launching lawsuits on Wednesday to halt vote-counting in three battleground states. It is not clear that the challenges will alter the election result.

Many of the protests were organized by local groups affiliated with Protect the Results, a coalition of grassroots organizations and labour unions.

In Michigan, after a rightwing, anti-lockdown group crowded outside a ballot-counting site in Detroit, demonstrators marched to demand that officials complete the count.

Police arrested dozens of protesters in Minneapolis who were demanding action on a range of issues including policing, climate change and immigration, according to local media reports.

The demonstration was reportedly planned prior to Tuesday’s election. Arrests were also made in Los Angeles and in Portland, Oregon.

Earlier on Wednesday in Detroit, a small cluster of supporters of Trump descended on a ballot counting center amid chants of “Stop the count!”. Trump has repeatedly insisted without evidence that there are major problems with the vote count and demanded that states that he is in danger of losing stop counting ballots.

The Detroit protests started shortly before the Associated Press declared Joe Biden had won the state of Michigan.

Video shot by local media showed angry people gathered outside the TCF Center and inside the lobby, with police officers lined up to keep them from entering the counting area. They chanted “Stop the count!” and “Stop the vote!”

In Phoenix, Arizona, pro-Trump demonstrators, some of whom were armed, gathered outside the state capitol to demand exactly the opposite. As Arizona officials continued to count votes, Joe Biden’s lead in the state shrank.

After several news organizations including the Associated Press, an American news agency, and conservative Fox News declared a Biden victory in the battleground state, the demonstrators chanted “Shame on Fox”.

Biden maintained a lead in Arizona by about 79,000 voters, with 515,000 uncounted votes remaining.

Earlier, the Republican campaign filed suit in a bid to halt the count, demanding Michigan’s Democratic secretary of state allow in more inspectors.

The Michigan attorney general, Dana Nessel, a Democrat, insisted both parties and the public had been given access to the tallying “using a robust system of checks and balances to ensure that all ballots are counted fairly and accurately”.

The prolonged task of counting this year’s deluge of mail-in votes had raised fears of widespread civil unrest, but so far that scenario has not come to pass.

US informed Pakistan about ‘Ukraine position’