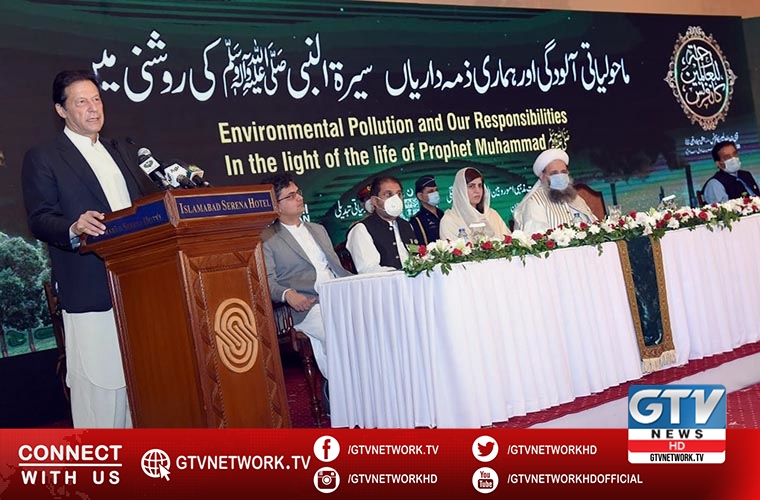 He said Pakistan will take the lead in engaging with the leaders of the Muslim world to effectively counter the surge of Islamophobia in the western world.

He said the European countries have no understanding of our religious sensitivities. Therefore, he underlined it as our responsibility to get them understood.

The Prime Minister said he has already written letters to the heads of Muslim countries.

He said he will personally contact them to evolve a common strategy against Islamophobia.

He said we also believe in freedom of expression but hurting the sentiments of others under its garb is not permissible.

Imran Khan said founders carved out Pakistan out with the vision to build it on the principles of State of Madina.

He said we are confronting problems today because unfortunately we deviated from the ideology of founding fathers.

The PM said the government would pass a law. That will make it compulsory for the students of class seven, eight and nine to study the life and teachings of Hazrat Muhammad Sallallaho Alaihe Wa Sallam Khatim un Nabiyeen.

He said the Holy Prophet made unparalleled accomplishments which no other person can achieve.

He said study of Seerat un Nabi (SAWW) will help the students better understand the personality of the Holy Prophet (SAWW); besides teachings of Islam.

He said we can address the issues such as climate change by taking guidance from the teachings of Hazrat Muhammad (PBUH).

The minister cited an effort made in the country to stoke sectarian strife which they foiled.

He said the conspiracies against the country will be foiled in future as well with the cooperation of religious scholars.

Qadri lamented the statement of French President backing the publication of blasphemous caricatures. He said it has hurt the sentiments of Muslims across the world.

He said PM Khan and Turkish President Erdogan have forcefully represented the sentiments of Muslim Ummah on the matter.

Coronavirus confirmed cases in Pakistan rise to 2450 while 35 died