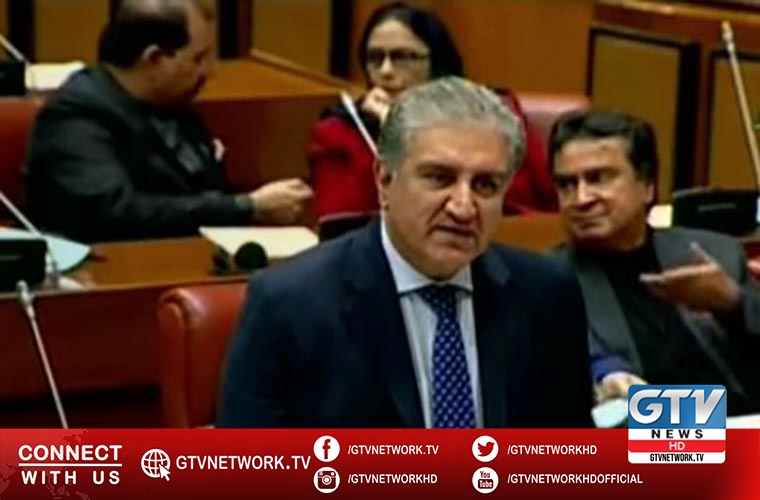 He said Kashmir is not just a dispute between Pakistan and India, but is a litmus test for our collective humanity to check gross human rights violations in the IOJK.

Furthermore, he said Indian brutalities are suffocating Kashmiri lives and Kashmiri people are subjected to worst kind of inhuman treatment.

He said political, religious, cultural, and economic liberties of the people of Kashmir are facing Indian oppression.

Qureshi said demographic structure in the occupied territory is being changed in violation of international injunctions and law.

He said Kashmiris have been deprived of digital connectivity in the age of digital media.

The Foreign Minister said Hindutva obsessed mindset is doing all this. He said humanity dies in Kashmir every day.

He said said the world must know and the Kashmir youth must know that even their voices are muzzled; they have their voice and their rights are being muzzled, they have rights.

Shah Mahmood said their lives are no less than a life of an American, European, or Indian.

He said they are not alone as the Pakistani youth is standing with you and will remain with them in future as well.

He advised the youth that they should continue their efforts to mobilize the world community on Kashmir question and they should never lose hope.

Moreover, he paid tribute to the sacrifices of Kashmiri people against Indian oppression.

He urged the world bodies including the UN to voice against Indian brutalities in IIOJ&K.

He regretted over the role of international community over silence on Indian inhuman attitude towards Kashmiri people.

The Minister said Kashmir is a national issue which evokes widespread sentiment in Pakistan.

He noted all political parties stand united against India’s forcible annexation of Kashmir.

The Minister said change of status of IIOJ&K after 5 August 2019 was the violation of UNSC resolutions.

He said today people in the IIOJ&K are being tortured, killed, incarcerate and deprived of their basic rights.

He said Prime Minister Imran Khan has successfully highlighted the Kashmir issue at international forums that vindicates he is the true ambassador of Kashmir.

Shibli reassured the Kashmiri people of continuous Pakistan’s moral, political and diplomatic support till they get their right to self-determination.