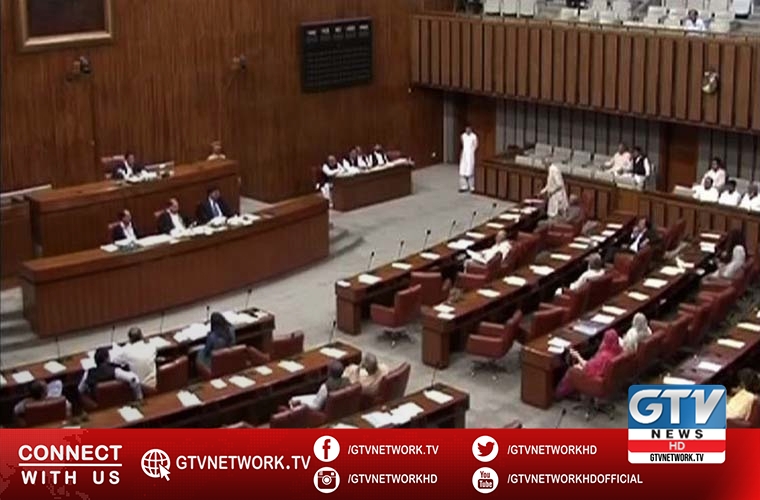 Senate lauds sacrifices of security personnel at Ormara and Waziristan.

At the outset, the house Friday offered fateha for the security personnel martyred in recent terror acts in Ormara and Waziristan.

Taking the floor, Opposition Leader Raja Zafar-ul-Haq voiced concerns over ceasefire violations by Indian forces on the line of control and recent terror acts in the country.

Adviser on Parliamentary Affairs Babar Awan said our forces are giving befitting response to any Indian aggression on the line of control.

He, however, said that India is playing a dangerous game in the region which poses threat not only to regional peace and security but also the world.

He said we are proud of our security forces that are rendering their lives for the security of the country.

The house also offered fateha for the first Prime Minister of Pakistan Liaquat Ali Khan who was martyred on this day in 1951.

Praying for the departed souls, the resolutions said the services of both the senators will long be remembered.

Meanwhile, the Senate was informed that the country’s economic growth is projected to be two percent during the current fiscal year despite global recession due to Covid-19.

The minister said that in the wake of the pandemic, the the government-announced stimulus package of 1240 billion rupees has provided necessary succor to different sectors including the SMEs.

He underlined the economic indicators as positive with remittances witnessing twenty percent increase as compared to previous years.

He said the FBR is exceeding its revenue targets which manifest increased activity in the industries including automobiles and textiles.

Hammad Azhar said despite resistance from some quarters, the government has strengthened money laundering laws.

Furthermore, he said the money laundering has now been declared a cognizable offense.

He expressed the confidence that our progress in this regard will be noted by the Financial Action Task Force (FATF) in its next meeting.

Minister further said the present government has shown seriousness to the action plan of the FATF.

Moreover, he said our aim is to involve a private party to run the core operations of the mills.

He noted it the effort of government to ensure availability of quality medicines to the people at reasonable rates.

He said the prices of 94 medicines were recently rationalized to ensure their production remains viable for the pharma industry.

Furthermore, he said the pharma industry cannot increase the prices of medicines without the approval of the relevant ministry.