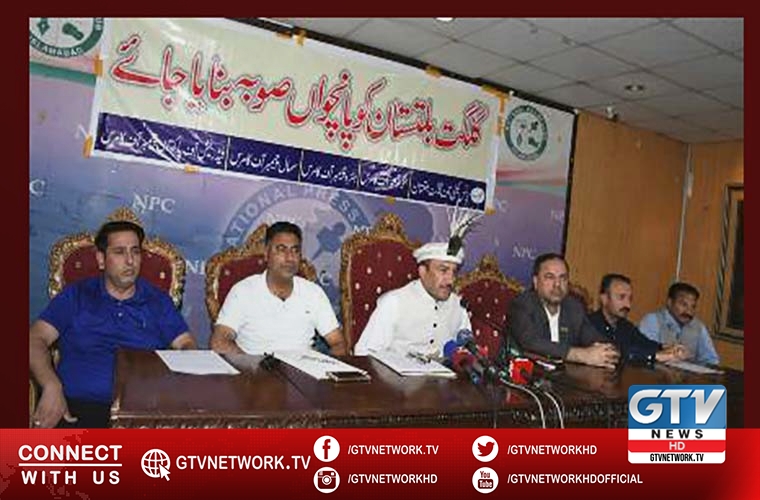 Once again, the business community of Gilgit- Baltistan (GB) including federation and local chambers made this demand on Monday.

They demanded for interim provincial status to the GB region for resolving the identity issue of the people to protect their constitutional rights.

The local chambers of commerce requested the federal government to protect the constitutional right of the people of GB.

For this, they called for resolving the issue of identity and to give them constitutional autonomy for development and prosperity in the region.

The Interim Minister for Excise and Taxation of GB and Vice President of Federation Pakistan Chamber of Commerce and Industry (FPPCI) Muhammad Ali Quaid also spoke.

They spoke at the National Press Club Islamabad.

Increasing business activity and investment in the region

He said that GB region has a huge potential to generate 50,000 MG hydro-electric power energy.

It will not just help local industries but also will provide energy to other major industrial centers in the country.

Besides,  he eyes industrial growth in GB region after achieving the constitutional status through interim province status expected

He said that GB region is considered a gateway for the game changer mega project of China Pakistan Economic Corridor (CPEC).

Hence, he called for changing current constitutional status of the region as a must to get more benefit from this mega project.

Former President Gilgit Chamber of Commerce and Industry, Qurban Ali said the people of GB has fought for the independence of the country.

He cited GB willingly joined Pakistan and always supporting and standing alert behind the Armed force of Pakistan for protecting the sovereignty of the nation.

He said that the GB region has huge geostrategic importance. He pointed  GB connect with China and energy rich Central Asian States to provide economic integration to the country with these potential countries.

He said that there is a huge need for political , economic and social stability in the country.

Furthermore, he said people of GB region want to play their due role in development and prosperity of the country.

Interim Minister for Law and Parliamentary Affairs Yaseen Baltistani advocate also demanded the interim provincial set up for the economic right of the GB people.

He was of the view that before the coming election of GB on November 15 all the stakeholder must support the interim provincial status of the GB region.

He said that after acquiring the constitutional right of interim provinces local people to achieve the economic right through CPEC and other mega projects.