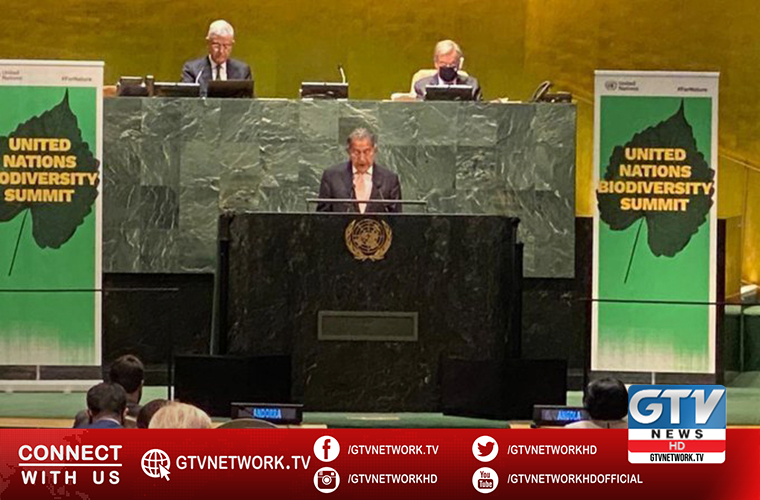 The President of UN Economic and Social Council (ECOSOC), Pakistani Ambassador Munir Akram, has called for political will on part of world leaders in this regard.

He said this, while addressing the first-ever UN Biodiversity Summit. He called for achieve biodiversity goals aimed at protecting the Earth’s plant and wildlife.

Munir Akram said it was a biodiverse and hospitable planet that accommodated the emergence and evolution of the human species, providing nutrition, clean air, fresh water, natural medicines and bountiful raw materials

“Our great prophets and holy books prescribed not only respect for each other, but also for nature and its bounties,” he said at meeting which virtually gathers some 70 heads of state/government and a number of top officials.

“Unfortunately,” the ECOSOC president said, “in the modern era, we have severely abused nature.”

Half the live coral cover on reefs has disappeared since the 1870s, with accelerating losses due to climate change.

As the UN Secretary-General has said, humanity is at war with nature and nature is fighting back, Ambassador Akram noted that impacts of climate change are visible and biodiversity loss will be equally devastating for the future of humanity.

Loss of biodiversity increases the likelihood of zoonotic diseases and COVID-19 is a grim reminder of the relation between humans and nature, he said.

The 17 Sustainable Development Goals are interlinked and if the biodiversity goals are not achieved, most of the other goals will be difficult to realize by 2030, Ambassador Akram said.

A new social and economic paradigm is needed that values nature more than gross national product (GNP) and per capita incomes, he said.

In promoting biodiversity goals there is a need to contain the economic greed and policy negligence that is driving humanity to destroy the planet, the ECOSOC chief said.

MNAs apprise PM of matters relating to their constituencies