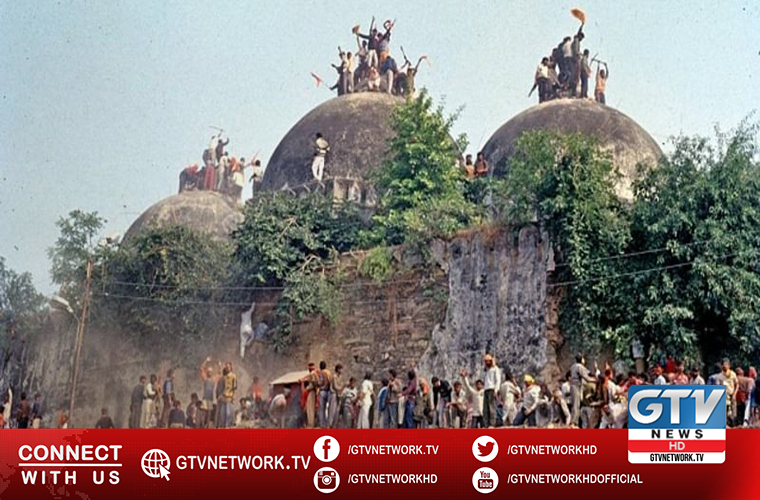 In this connection, Ministry of Foreign Affairs has issued a statement today (Wednesday).

It said Pakistan strongly condemns today’s shameful acquittal of the criminals responsible for demolishing the centuries-old Babri Masjid in Ayodhya in 1992.

Taking almost three decades to decide on the criminal act which was televised live and happened as a result of well-planned RathYatrasand on the instigation to mobs by the accused BJP, VHP and other leaders of Sangh Parivar, tells the world that the Hindutva-inspired Indian judiciary miserably failed to deliver the justice again.

The demolition of the mosque had resulted in BJP-led communal violence leading to thousands of killings.

If there was a semblance of justice in the so-called largest ‘democracy’, the individuals,who had boasted of the criminal act publicly, could not have been set free.

This is yet another manifestation of the pliant judiciary under the extremist BJP-RSS regime in which extremist ‘Hindutva’ ideology takes precedence over all principles of justice and international norms.

A wrong direction was earlier set by the Indian Supreme Court’s partisan verdict last year by handing over the Babri Masjid premises for building of Ram Mandir to the very Hindu parties which had demolished the historic mosque. The acquittal today is even against that verdict which had noted that the demolition was “an egregious violation of rule of law.”

These reprehensible developments with state complicity,coupled with RSS-BJP’s deep-rooted hatred against minorities, particularly Muslims, point to India’s fast descent into a Hindu Rashtra, where minorities have been relegated as second class citizens.

Willful targeting of Muslims is rampant in today’s India — ranging from efforts to disenfranchise Muslims under anti-Muslim Citizenship Amendment Act (CAA) and the looming National Register of Citizens (NRC),and a well-organized and orchestrated pogrom of Muslims in New Delhi with state complicity in February this year, to other anti-Muslim measures like demonizing, dispossessing, marginalizing and subjecting Muslims to targeted violence.

The BJP-RSS anti-Muslim agenda is most visible in Indian Illegally Occupied Jammu & Kashmir (IIOJK) which remains under continued military siege and the BJP continues to implement its sinister policies to change the demographic structure of the occupied territory.

The RSS-BJP regime and the Sangh Parivar are responsible for the continued desecration and demolition of mosques in India in an organized manner as they did during the Gujarat massacre of 2002 and Delhi pogrom in 2020.

The attacks by Hindu zealots on places of worship of Muslims have continued even during the Covid-19 pandemic.

Emboldened by the flawed Ayodhya verdict, Hindu zealots supported by their RSS-patrons in power, are now seeking removal of the Shahi Idgah Masjid located next to Krishna Temple in Mathura as well as to give ownership of the entire 13.37 acres of land to the Krishna Temple complex.

Pakistan urges the Indian government to ensure safety, security and protection of minorities, particularly Muslims and their places of worship and other Islamic sites on which the Hindu extremists and zealots have laid claims.

The world community, the United Nations and relevant international organizations are expected to play their role in safeguarding the Islamic heritage sites in India from the extremist Hindutva regime and ensure protection of religious rights of minorities in India.