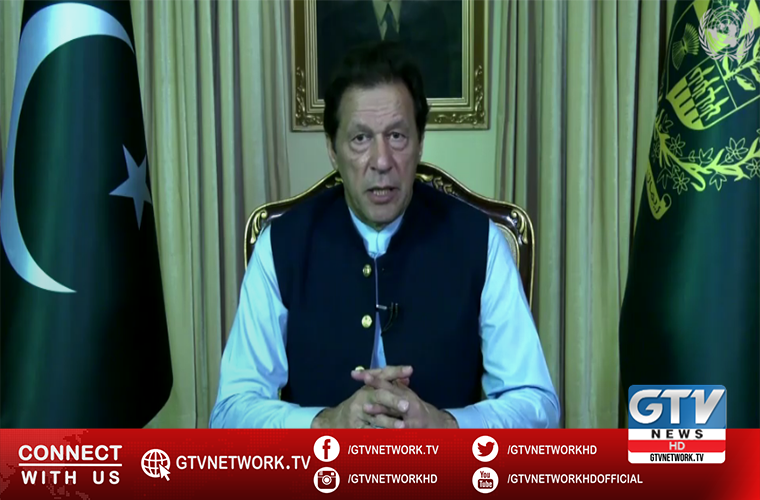 Prime Minister Imran Khan made this demand, while virtually addressing the 75th Session of the UN General Assembly.

He spoke on a host of issues, ranging from Kashmir dispute, peace in Afghanistan, Islamophobia, plight of minorities in India, COVID-19 pandemic to the issue of climate change.

He urged the international community to prosecute the Indian civil and military personnel involved in state terrorism and serious crimes against humanity in IOJK.

The Prime Minister asked the global community to investigate the grave human rights violations, being perpetrated with complete impunity in IIOJK by the Indian occupation forces.

Highlighting the Indian atrocities against the Kashmiri people, the Prime Minister said these are well documented in several reports, including that of the UN High Commissioner for Human Rights.

He said India illegally and unilaterally sought to change the status of occupied territory on fifth August last year and deployed additional troops, bringing the total number to 900,000 to impose a military siege on eight million Kashmiris.

All Kashmiri political leaders were incarcerated; about 13,000 Kashmiri youth were abducted and thousands tortured; a complete curfew was imposed, accompanied by a total communications blackout.

Imran Khan said India has extra-judicially murdered hundreds of innocent young Kashmiris in fake “encounters”, refusing even to hand over their bodies for burial.

He said Kashmiri media, and those daring to raise their voice, are being systematically harassed and intimidated through the use of draconian laws.

The Prime Minister said the military siege is being followed by moves to change the demographic structure of the occupied territory.

This is an attempt to obliterate the distinct Kashmiri identity in order to affect the outcome of a plebiscite envisaged in the UN Security Council resolutions.

They are fighting for a just cause and generation after generation have laid down their lives to rid themselves of Indian occupation.

Prime Minister reaffirmed Pakistan’s commitment to stand by their Kashmiri brothers and sisters in their legitimate struggle for self-determination.

Imran Khan said India is playing a dangerous game of upping the military ante against Pakistan in a nuclearized environment to divert attention from its illegal actions and atrocities in Indian Occupied Jammu and Kashmir.

He said despite constant Indian provocations, Pakistan has exercised maximum restraint. He said Pakistan has also consistently sensitized the world community about a ‘false flag’ operation and another ill-conceived misadventure by India.

The Prime Minister categorically stated that any attempt by the fascist totalitarian RSS-led Indian government to aggress against Pakistan will be met by a nation that will fight for its freedom to the end.

Describing the resolution of Kashmir dispute, imperative for peace and stability in South Asia, the Prime Minister stressed upon the UN Security Council to prevent a disastrous conflict and secure the implementation of its own resolutions as it did in the case of East Timor. The Security Council must take appropriate enforcement actions and protect the Kashmiris from an impending genocide by India.

Imran Khan asked India to rescind the measures it has instituted since 5 August last year, end its military siege and other gross human rights violations, and agree to resolve the Jammu and Kashmir dispute in accordance with the relevant UN Security Council resolutions and the wishes of the people of Kashmir.

Regarding Islamophobia, Imran Khan said wilful provocations and incitement to hate and violence must be universally outlawed. He demanded of the UN General Assembly to declare an “International Day to Combat Islamophobia” and build a coalition to fight this scourge.

Referring to incidents of the demolition of Babari Mosque, Gujarat massacre, and Samjhota Express tragedy, the Prime Minister regretted that India is the country, where state is sponsoring Islamophobia because of RSS ideology.

He said cow vigilantes attack and kill Muslims with impunity.

Imran Khan said that our foreign policy aims to have peace with our neighbour and settle dispute through dialogue. He said UN is the only body that can help us achieve our goals of peace and stability in our neighbourhood.

Talking about peace in Afghanistan, the Prime Minister said Pakistan has consistently maintained over the past two decades that there is no military solution to the conflict in Afghanistan. The only way forward was and is a political settlement which involves the full spectrum of Afghanistan’s political actors.

He mentioned that Pakistan fully facilitated the process that culminated in the U.S.-Taliban Peace Agreement on 29 February 2020. Pakistan is deeply gratified that it has fulfilled its part of the responsibility.

He urged the Afghan leaders to seize this historic opportunity to achieve reconciliation and restore peace in their war-torn country through an inclusive, broad-based and comprehensive political settlement.

He said the process must be Afghan-led and Afghan-owned, and without any interference or outside influence. He said spoilers should not be allowed to subvert the peace process.

The PM said early return of Afghan refugees must be a part of this political solution.

Turning to Palestine issue, Imran Khan said Pakistan continues to support a two-state solution with Al-Quds Al-Sharif as the Capital of a united, contiguous and independent Palestinian state.

Highlighting the adverse impact of money laundering on the developing countries, the Prime Minister called upon the UN General Assembly to take the lead in efforts to build a global framework to stem the illicit financial flows and ensure speedy repatriation of stolen wealth.

He said if this phenomenon is unaddressed, it will continue to accentuate the inequality between the rich and the poor nations, and eventually will spark off a far bigger global crisis than the present migration issue poses.

Alluding to the threat posed by climate change, the Prime Minister emphasized commitments made through the Paris Agreement must be fulfilled, in particular the commitment to mobilize 100 billion dollars annually as climate finance.

He said though Pakistan’s contribution to carbon emissions is minimal yet it is one of those countries most affected by climate change. He said Pakistan has decided to take the lead as we consider addressing climate change a universal responsibility.

Th PM said we have launched an extremely ambitious programme to plant 10 billion trees in the next three years as our contribution to mitigating the effects of climate change.

Deliberating upon Pakistan’s successes against the COVID-19 pandemic, Imran Khan said the country’s small lockdown policy helped to control the virus, stabilize the economy and helped protect the poorest segment of the society.

While concentrating on the virus hot-spots, we opened up our agricultural sector immediately and then followed it up by the construction sector, which employed most of the people.

The Prime Minister said the rich countries should support the creation of at least 500 billion dollars in new Special Drawing Rights for the developing world.

The Prime Minister also called for a comprehensive reform of the United Nations, including the Security Council, to promote greater democracy, accountability, transparency and efficiency.

He said Pakistan will continue to participate actively in this process and endeavour, with other Member States, to build a world where conflict is outlawed and equitable prosperity for all pursued in conditions of peace and security.

Praise to God. Alhamdulillah was the last tweet from outgoing DG ISPR