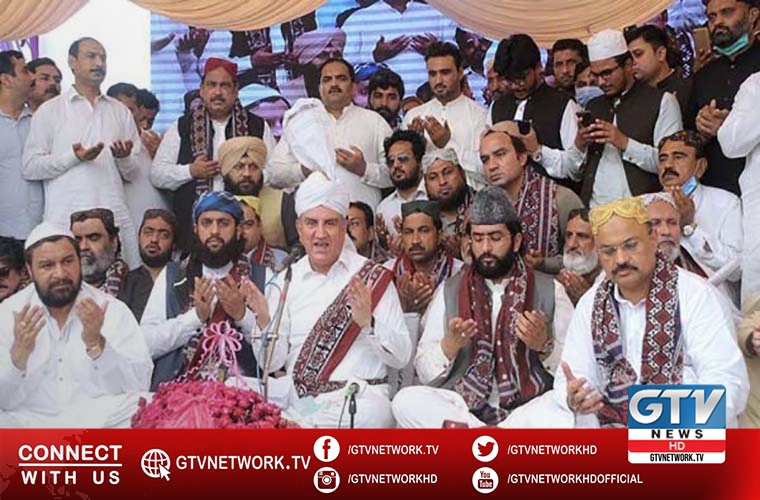 Custodian of the Mausoleum Shah Mahmood Qureshi slammed BJP, the ruling Indian party for targeting its Muslims minority by framing multiple legislation and placing restrictions on their religious freedom which was sheer human rights violation.

He said Muslims of India were compelled to live under particular ideology of Hindutva and frequently subjected to violent attacks by right wing Hindu nationalists.

The FM expressed regret that a large number of Indian devotees, especially Rajasthan were restricted to come Pakistan for attending Urs ceremony.

They weren’t given visa to move in the country when they had applied for it.

He prayed for liberation of Occupied Kashmir from illegal rule of India. He said Kashmiris were passing through worst phase of their lives and facing brutal kind of human rights violation at hands of the occupied army.

He prayed for continuity of on-going peace process in Afghanistan as it was widely linked to stability of the entire region.

Shah Mahmood hailed the devotees who came from far-flung places of the motherland amid harsh circumstances.

Thanks God that the ceremony which had been put into doubt following corona situation, was ended amicably, he said.

Foreign Minister urged people to hold solidarity among their ranks.

He said the nation was facing wide division both eternally and internally.

He prayed for establishing peace and prosperity not only in the country, the entire Muslim world to get saved from conspiracies of enemies.

Earlier, Auqaf Minister Saeed-ul-Hassan speaking on the occasion urged the Urs participants to follow Sunnah of Holy Prophet (pbuh) to secure blessing of both of the world and hereafter.

He said one should have to be connected with teaching of saints to gain blessing of Allah Almighty.