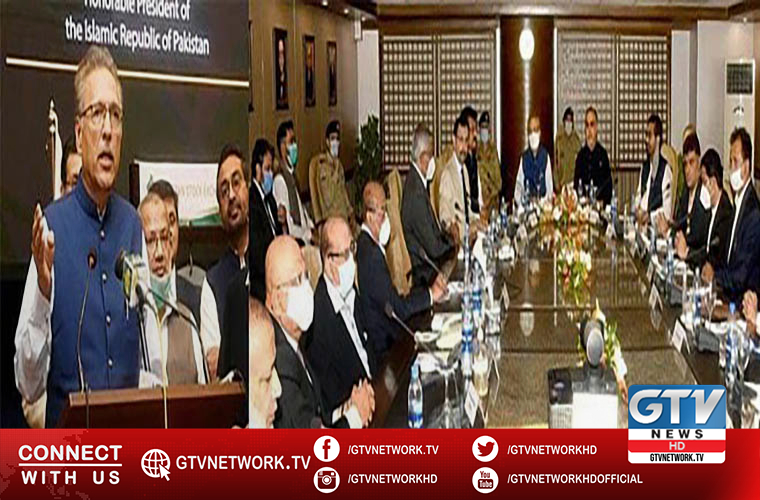 Dr Arif Alvi on Wednesday talked to the media after holding an interactive session with the PSX management in Karachi at the Pakistan Stock Exchange building.

He expressed his satisfaction over the performance of Pakistan Stock Exchange (PSX).

Furthermore, he emphasized on its due projection as the best performing capital market in Asia and number four in the world, and its potential for further growth to attract more investment even by local small investors.

“ This is my message, tell the world about our stock exchange. Small investors should also be encouraged to invest here ,” He was accompanied by Sindh Governor Imran Ismail. The PSX side included its Chairman Suleman Mehdi, Managing Director Farrukh H Khan and Director Shahzad Chamdia.

On the occasion, the president was given a detailed briefing on the PSX’s working, role in the country’s economy and the initiatives/products in pipeline to further strengthen its position in the world.

President Alvi said it was his desire since long to visit the PSX , which had materialized today. It was very encouraging to listen that the stock exchange had now matured and consolidated.

Emerging of the PSX as the world class capital market, he observed, showed that Pakistan was at the pick up point.

The exchange’s each indicator was very positive and it offered very good return in terms of Pak rupee and dollar. However, more public limited companies should be listed on it, he added.

He said the PSX was moving up with clarity and certainty with prosperous future. Many products had been introduced to raise the capital.

“ There are different analysis in the market. But the fact is, Pakistan’s capital market is the best and Pakistan’s economy is the best,” he remarked.

Dr Alvi said Pakistan would have to play important role in rebuilding of Afghanistan as soon as peace was established there. Its cement and steel companies would an opportunity to sell their products there.

“ InashahAllah, very soon peace will be established in Afghanistan,” he added.PSX Managing Director Farrukh H Khan said the Pakistan Stock Exchange had not been closed, even for a single minute, due to the tough situation arisen because of the COVID-19 pandemic.

“ We managed to keep the exchange running in very difficult situation,” though the economic activities remained almost suspended across the world, he added.

He said in the aftermath of coronavirus, the world was still faced with serious economic crisis, but Pakistan’s economy had started recovering.

The PSX, he said, was offering the best long-term return and stressed on investment in the stock market for long term to reap its real benefits. There was need to focus more on the market to capitalize its huge potential and prospects.

He said the visit of President Alvi and Governor Imran Ismail to the PSX was very encouraging for the management.

During the interactive meeting, many issues relating to the capital market were discussed and both the dignitaries assured their support in resolution of certain issues to encourage investment in the capital market and listing of companies on the Pakistan Stock Exchange.