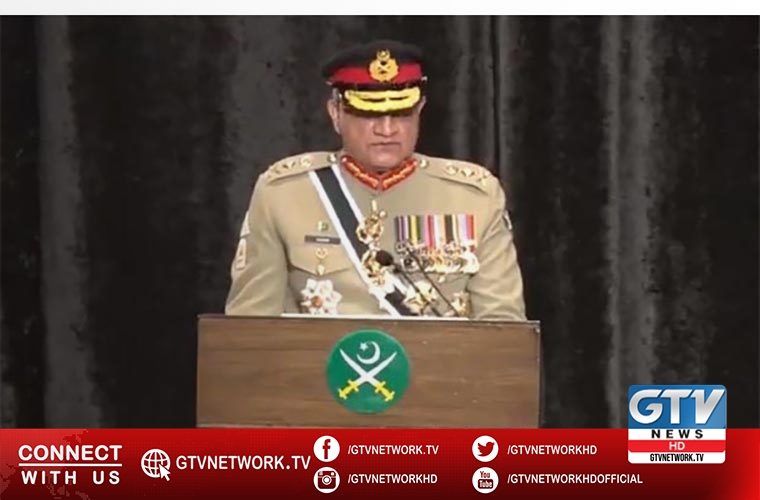 Pakistan defeated greater enemy in might in 1965, according to Chief of the Army Staff General Qamar Javed Bajwa.

He said on Sunday that the Armed Forces of Pakistan in September, 1965 had defeated the enemy many times greater in might than it.

The families of Shuhada (martyrs) and Ghazis, senior serving Military Officers and Soldiers also attended the ceremony. As many as 40 officers were awarded Sitara-i-Imtiaz (Military), 24 officers and soldiers were awarded Tamgha-e-Bisalat and a soldier was awarded United Nations (UN) Medal. The medals of Shuhada were received by their family members.

Pakistan is a peace-loving country

He said, “On this occasion, I want to send a message to my nation and the world that Pakistan is a peace-loving country. But if war is imposed on us, we will befittingly respond to every aggression.”

He added that they had demonstrated this in response to the failed air strike at Balakot and the enemy should have no doubt. COAS said September 6, 1965 was an indelible chapter in our history. “This is the day when countless stories of unity of the nation, love of homeland, sacrifice and bravery were marked in history.”

It was not just a day for the nation but evidence to our courage and also commemorated the martyrs of 1948, 1965, 1971, the Kargil War and the war on terror, he added. General Qamar Javed Bajwa said even today they were defending their freedom with our blood.

“That is why we are here today to remember the great deeds of our martyrs and conquerors and to pay tribute to their sacrifices. It is due to their courage, bravery and sacrifices that our freedom, sovereignty, peace and security are established.”

He also paid tribute and homage to the families of the martyrs and said: “I salute them. I assure them that we will never forget the sacrifice of their loved ones.

Our martyrs are our heroes

Our martyrs are our heroes and the nations that forget their heroes are annihilated. I salute your spirit of self-sacrifice and assure you that we are and will be with you on every step of the way.”

The COAS said the entire nation was indebted to your patience and sacrifice. “Just as the martyrs are the pride of the whole nation, so are you our pride.” He congratulated the officers, junior commissioned officers and soldiers who received the awards at the ceremony.

“We are all proud of you for the professionalism you have shown in the performance of your duty, upholding the high tradition of the Pakistan Army. The medals on your chest are a source of pride not only for you but for all of us.”

The state of Pakistan and the great Pakistani nation were the bearers of the ideology of a separate Islamic identity. “It is on this basis that we gained freedom and that is our identity today and tomorrow. Our enemies have been hatching conspiracies to destroy this identity, but thanks to Alimghty Allah the Pakistani forces and the nation have thwarted their every move with passion and faith. Freedom and security of the homeland is our mission. This torch has been lit by our forefathers with their blood and we are determined to keep it burning.”

COAS said it was a great honor for him to command a brave and courageous army like the Pakistan Army. Every officer and soldier of our armed forces due to his professionalism, high discipline and self-sacrifice, represented an army whose capabilities were recognized by the world. Whether on the frontiers or in the face of terrorism, natural disasters or repatriation duties, the Pakistan Armed Forces performed the duty of protecting and serving their nation as a very sacred duty.

He mentioned that he would like to take this opportunity to draw the participants’ attention to another challenge that had been imposed on us in the form of 5th Generation or Hybrid War.

“Its purpose is to discredit the country and the Pakistani forces and spread chaos. We are well aware of this danger. We will surely succeed in winning this war with the cooperation of the nation, by the will of Almighty Allah.”

The COAS noted that the nation had gone through great trials in the last twenty years. There was a state of war on the eastern and western borders, there were trials like earthquakes and floods, they fought a nerve-wracking war against terrorism and extremism in which thousands were killed and millions were displaced.

And they also faced a calamity like a locust heart which they successfully coped with. In all these hours of trial, they did not give up rather stood firm and by the grace of Almighty Allah achieved victory. Indeed, he said, thanks to this hard work and countless sacrifices, Alhamdulillah (thanks to Allah Almighty).

Motto of our leader Quaid-e-Azam, work, work and just work

He said: “today’s Pakistan is a peaceful Pakistan and now we have to turn this peace into prosperity and development. As a nation, we have to fight for it. We have to adopt the principles of unity, faith and discipline , and we have to follow the motto of our leader Quaid-e-Azam, work, work and just work.”

The Army Chief said, Pakistani forces had made many sacrifices for the establishment of peace in different parts of the world by becoming part of the United Nations peacekeeping force. “We want peace in the whole world and especially in our region. Pakistan’s key role in peace efforts in Afghanistan is a testament to that, but our neighbor India has, as always, taken an irresponsible stance.”

Peace in the region, he said, was once again in grave danger, especially after the illegal move to end the special status of Indian Illegally Occupied Jammu and Kashmir.

“There is no doubt that Jammu and Kashmir is an internationally recognized issue. We do not accept any unilateral decision in this regard.”

The founder of Pakistan, Quaid-e-Azam Muhammad Ali Jinnah, had declared Kashmir as the jugular vein of Pakistan. “I want to make it clear that every word of his statement is important to us and part of faith. We will not show any flexibility in this regard. We cannot be intimidated by a stockpile of newly acquired weapons, nor can we be intimidated by any threat. Pakistan’s armed forces are fully equipped, vigilant and aware. And God willing, they are ready to respond immediately and with full force to any move of the enemy.”

The COAS said, time has tried us many times and they have succeeded every time. “Pakistan is a living reality. Our blood, our passion, our actions will bear witness to this on every front.