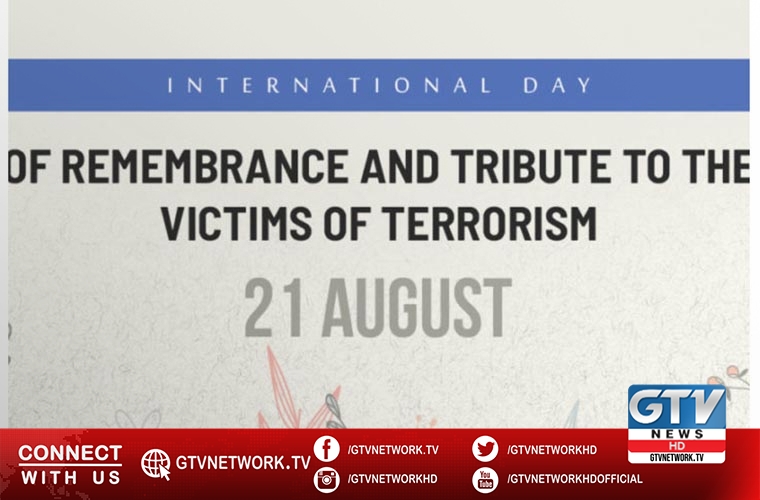 Pakistan observes International Day of Remembrance and Tribute to Victims of Terrorism today on Friday.

The Day aims at honoring and supporting the victims and survivors of terrorism and promote their fundamental freedoms and rights.

The third commemoration of the International Day of Remembrance of and Tribute to the Victims of Terrorism will take place on 21 August 2020 at 10 am (New York time EDT).

An online high-level event entitled “Not Forgotten: Stories of Remembrance of Victims of Terrorism”, will be held with the participation of the United Nations Secretary-General, Mr. António Guterres, for victims to speak about remembrance on their own terms, reminding the audience that it is not only about bereavement, but also about acknowledging the experience of survivors.

A short film on remembrance will be launched, with testimonies of victims and survivors of terrorism demonstrating their individual journey and experience, especially since the onset of the pandemic.

This will be followed by an interactive discussion with a panel of victims, victims’ associations, and experts on how the pandemic has affected the ability to honour and commemorate victims and survivors of terrorism.

The event provides an opportunity for victims to share their stories and to urge the international community to strengthen their rights and address their needs, even during global health emergencies.

Why Day of Remembrance and Tribute to Victims of Terrorism

It seeks to build on and consolidate these efforts, and translate them into practical and sustainable actions at the national level, shaping the way forward on national and cross-border commemoration efforts, and on developing comprehensive national assistance plans that address the need of victims of terrorism for communal support, remembrance, and even redress.

This event is organized in collaboration with the Group of Friends of Victims of Terrorism.

UN General Assembly, in its resolution 72/165 (2017), established 21 August as the International Day of Remembrance of and Tribute to the Victims of Terrorism in order to honor and support the victims and survivors of terrorism and to promote and protect the full enjoyment of their human rights and fundamental freedoms.

Notably, primary responsibility to support victims of terrorism and uphold their rights rests with Member States.

The United Nations has an important role in supporting Member States to implement Pillar I and IV of the UN Global Counter-Terrorism Strategy through standing in solidarity and providing support to victims, capacity building assistance, establishing networks of, and offering support to, civil society organizations, particularly victims of terrorism associations, and encouraging Member States to promote, protect and respect the rights of victims.

United Nations has been working to provide resources, mobilise the international community and better address the needs of victims of terrorism.