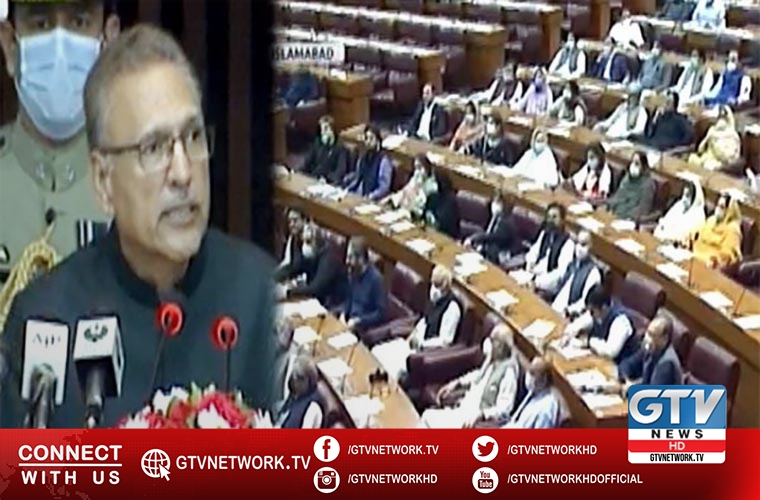 President notes all the state institutions on the same page with a united approach of ensuring rule of law and social justice for the people.

Dr Arif Alvi on Thursday said all the state institutions of Pakistan, including parliament, army and judiciary, were “on the same page” with a united approach of ensuring rule of law and social justice for the people.

President notes all the state institutions on the same page

“Our state institutions are in unison and pursuing the same vision of overcoming challenges confronting the country,” the president said in his address to the joint sitting of parliament on the start of new parliamentary year.

The joint session of Senate and National Assembly was convened by President Alvi in exercise of his powers under Article 54(1) of the Constitution.

The president, in his address, also touched upon several issues, from the government’s pro-active foreign policy to strategy to deal with the coronavirus pandemic.

Furthermore, he also spoke on improvement in economic situation and launch of social welfare projects, which, he said, had altogether put the country on path to prosperity.

Dr Alvi said Pakistan was literally at its tipping point of emerging as a forward-looking nation.

He said Pakistan is seeing a bright future, favouring development and innovation for the first time in its history.

Overcoming of the COVID-19 challenge

President Alvi under lined overcoming of the COVID-19 challenge exemplary.

He said it came as a result of the government’s prudent smart lockdown policy combined with the nation’s discipline and positive response.

Despite the pressure for a complete lockdown, he said, the government’s priority of minimizing the negative financial impact on the poor, made the country to opt for the right strategy.

“Nations are built by making strong decisions which are not solely based on data and science, but empathy as well,” he said, adding the vision was “not to let the poor die” in contrast to several developed countries.

Dr Alvi mentioned that to cope with the situation, the government provided a relief package of Rs 1.2 trillion to the business community, besides disbursing Rs 200 billion among deserving families through the Ehsaas social welfare programme.