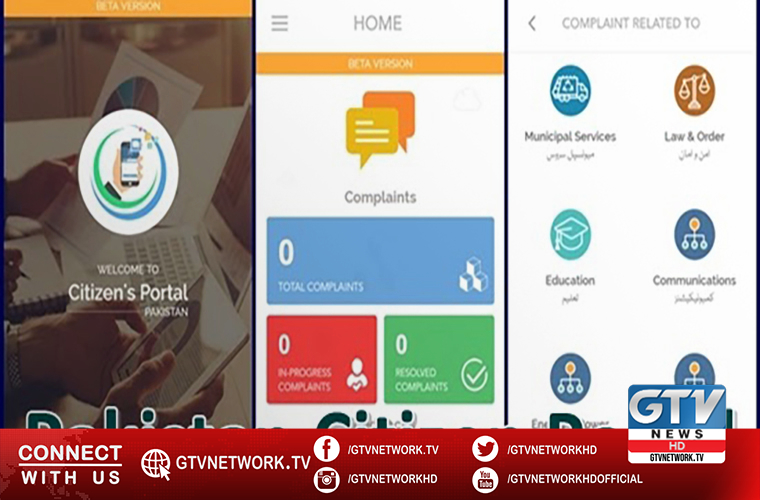 According to official sources, Citizen’s Portal has registered 241,8424 complaints with a 95.9 per cent resolution rate till date.

Pakistan Citizens Portal Provided an integrated platform to the masses where the highest office listens and responds. PMDU was committed to restoring the spirit of tolerance and acceptance amongst all the citizens of Pakistan.

A massive amount of complaints had been addressed and were under process, people all over Pakistan had reached out with problems which were being resolved.

Prime Minister’s Performance Delivery Unit (PMDU) established in 2013 has been reorganized with a new vision to promote citizen-centric and participatory governance. PMDU had pioneered a nation-wide. complaints and grievances redressal mechanism with special emphasis on facilitation of overseas Pakistanis, women, special persons and foreigners.

The primary objective of the unit was to provide citizens an opportunity to seamlessly communicate with all government entities and had their issues resolved on priority, in accordance with the vision of the Government.

The Unit would enable the establishment of a culture of quantified performance management and make the various government entities accountable for their mandated roles and responsibilities.

Besides, the Unit would put forward recommendations, amendment and simplification of cumbersome official procedures as evidenced from the database for the purpose of assuring public facilitation.

The unit strive to assure that the registered citizens/ members on Pakistan Citizen’s Portal (PCP) get every possible relief from the Government Organizations being interacted.

The citizens/ members may have suggestions to put before the authorities or personal complaints and grievances or to report violations of laws by the people or to seek guidance etc.

The Unit took it as a prime responsibility to ensure that all complaints and suggestions are handled fairly and efficiently through concerned organizations.

It is designed to help the government organizations to efficiently respond to the matters raised on the Portal.

The processes described in this manual are intended for understanding and use of all concerned stakeholders.

The report stated that key objectives behind the vision were service delivery at a Citizen’s doorstep and establishing a platform with Public’s trust.

The portal was operational from highest office of Pakistan, Prime Minister office, Public’s queries being received at the highest level of Govt Level.

Due to digitalization-public did not need to visit government departments, complaints to get resolved with a click.

Pakistan Army soldier martyred due to Indian firing at LoC

COAS reiterates Pakistan commitment to peace and stability in the region