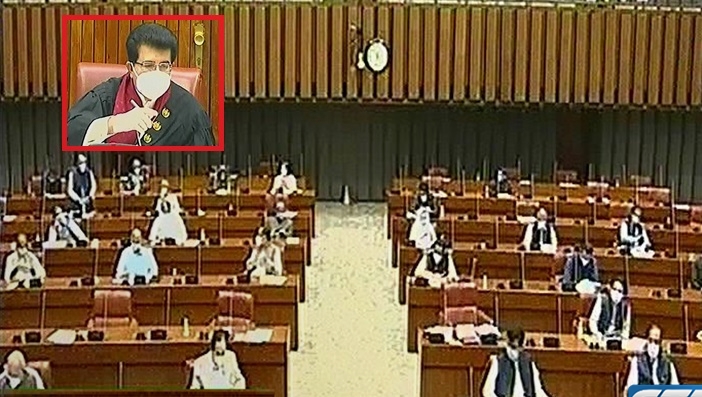 The Compulsory Teaching of Arabic Language Bill 2020 tabled in Senate.

Upper house of Pakistan’s bicameral parliament resumed its session at the Parliament House in Islamabad this afternoon.

“The Compulsory Teaching of Arabic Language Bill, 2020”, “The Protection against Harassment of Students in Educational Institutions Bills, 2020” and “The Companies (Amendment) Bill 2020” introduced in the House today.

The Chair referred the bills to the concerned Standing Committees of the House.

Responding to a point of order raised by PPP Leader Sherry Rehman, Leader of the House Dr. Shahzad Waseem said the process of accountability will continue without any discrimination as everyone is equal in the eyes of the law.

He said we are ready to sit with the opposition if it has any concern about NAB law.

He said it is the current government which has set the tradition that any government functionary facing allegations will have to relinquish his office and can only re-join after clearing his position.

The Senate was informed today that the government is committed to make Pakistan polio free country.

Responding to a motion regarding increase in polio cases in the country, Minister of State for Parliamentary Affairs Ali Muhammad Khan said so far 63 cases were reported in 2020, which include 22 in Khyber Pakhtunkhwa, 21 in Sindh, 15 in Balochistan, and five in Punjab.

He said the trend of polio cases is declining in the country as the government launched several anti-polio drives to eradicate the virus.

He said that a national immunization drive against all the four types of poliovirus will be started from 23rd November this year.

The House today passed “The Anti-Terrorism (Amendment) Bill, 2020. Under the “The Anti-terrorism (Amendment) Bill, 2020, scope of the application of the penalties has been extended to those who are involved in terrorism in any manner outside the boundaries of the country and to provide legal powers to the Law enforcement agencies for speedy trial and disposal of cases.

The freezing of assets of proscribed persons, proscribed organizations and the affiliates is necessary to curb the terrorism.

The National Assembly has already passed the bill.

The Senate was informed today that Israel was, is and will remain enemy number one of Muslims and Pakistan until Palestine issue is resolved and Al-Aqsa mosque is set free.

This was stated by Minister for State for Parliamentary Affairs Ali Muhammad Khan while responding to a motion moved by Senator Usman Khan Kakar regarding the prevailing political situation in the country and its impacts on the country.

The Minister of State said there is no question of recognizing Israel under the leadership of Prime Minister Imran Khan. Regarding Pakistan’s relations with Saudi Arabia, he said we have cordial relations with the Kingdom and nothing can come in the way of brotherly ties between the two Muslim nations.

MoU between Pakistan and Turkey for cooperation in education sector signed