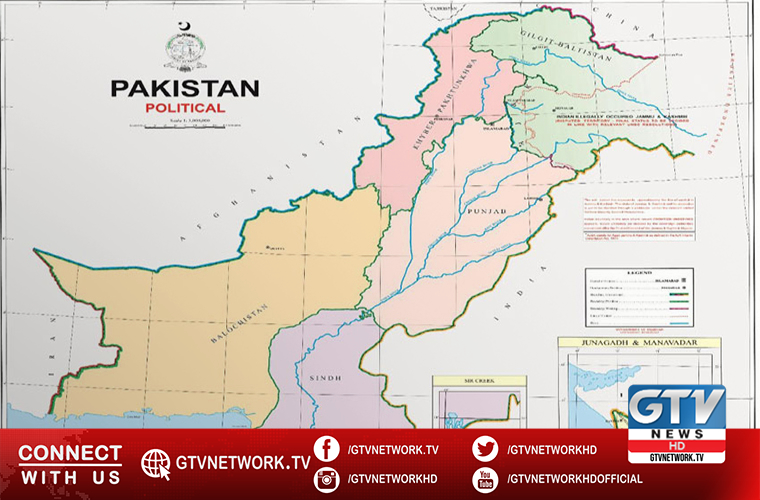 Prime Minister Imran Khan unveils new political map of Pakistan that truly represents aspirations of the people of the country.

In a televised address, he said the new map supports the principled stance of the people of Pakistan as well as the Indian illegally occupied Jammu and Kashmir about the Kashmir issue.

He said the map, which has been endorsed by the federal cabinet, is fully backed by the entire political leadership of the country.

He said this new official map will henceforth be used in curriculum.

The Prime Minister reiterated that implementation of the UN Security Council resolutions is the only solution to the Kashmir dispute.

He said Pakistan will continue its political and diplomatic efforts for resolution of the longstanding dispute. He hoped that we will achieve this goal one day.

He said the map clearly shows Kashmir as a disputed territory, which is required to be resolved under the UN resolutions and as per aspirations of the people of Indian illegally occupied Jammu and Kashmir.

He said India’s illegal action of August 5 last year has totally been rejected in the map.

The Minister said it has been declared that Siachen is part of Pakistan, and we challenge India’s position on it.

Similarly, he said, India’s claim about Sir Creek has also been rejected in the map. He said the map also shows that erstwhile FATA areas have become part of Khyber Pakhtunkhwa province.

Shah Mahmood Qureshi said the new map has given a message that the Pakistani nation will continue supporting the Kashmiris for securing their inalienable right to self-determination.