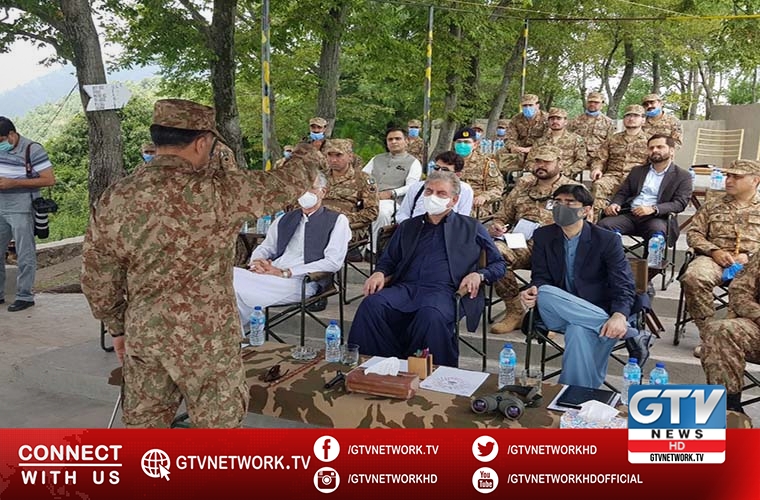 Ministers along with media visit forward post of Chiri Kot near LoC.

Ministers along with media visit forward post of Chiri Kot

On this occasion, Foreign Minister spoke to the media.

He said the people of Indian Illegally Occupied Jammu and Kashmir are not alone in their just struggle for right to self-determination.

The FM said the people of Pakistan will raise voice and flags in support of oppressed Kashmiri people on Wednesday.

He said this struggle will continue until the Kashmiris get their right to self-determination as promised to them by the UN Security Council Resolutions.

The Foreign Minister regretted that the people of Indian illegally occupied Jammu and Kashmir were not allowed to offer Eid ul Azha prayers and sacrifice animals.

He said implementation has been started on the action plan to protect the people of Azad Kashmir from the Indian ceasefire violations.

Earlier, the military officials  gave briefing to Foreign Minister Shah Mahmood Qureshi and Defense Minister Pervez Khattak in detail about the LOC situation on their arrival at Chiri Kot sector.

The FM appreciated the courage, valiance and passion of the soldiers of Pakistan Army. He said the entire nation is proud of their bravery.

They discussed the situation in Indian illegally occupied Jammu and Kashmir.

Furthermore, they also discussed the strategy to observe 5th August as Youm-e-Istehsal.

The Foreign Minister reaffirmed Pakistan’s commitment to raise the voice of oppressed and unarmed Kashmiri people at every world forum.

Earlier, in a video message before leaving for Chiri Kot Sector of Line of Control, along with Defense Minister Pervez Khattak, he said the Kashmiri people have rejected the Indian illegal steps of 5th August. He said nobody will accept them.

The Foreign Minister said the Kashmiri people will continue their struggle until they get their right to self-determination.

The Foreign Minister said that he is visiting the Azad Kashmir border along with the Defense Minister to express solidarity with the Kashmiri people who face the Indian atrocities and unprovoked firing on daily basis.