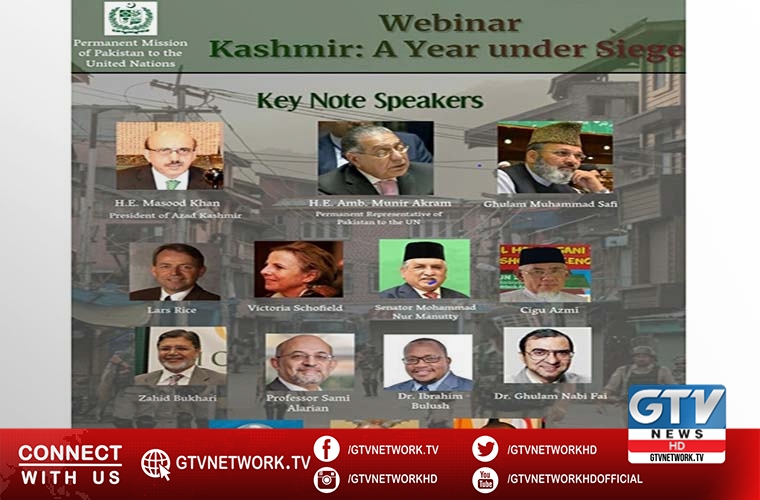 Permanent Representative of Pakistan to the United Nations, Ambassador Munir Akram address as one of the keynote speakers.

Pakistan Mission to UN to host webinar on Kashmir

The webinar will discuss the various aspects of the Jammu and Kashmir dispute especially in the wake of the illegal Indian actions of 5 August 2019.

Special attention will be placed on the legal, moral and political legitimacy of the just struggle of the Kashmiris for their right to self-determination. The role of the civil society to project and promote the voice of the Kashmiri people will be particularly highlighted.

The webinar will be broadcasted through Microsoft teams and will also be available on Facebook live and official twitter handle of the mission @Pakistan UN_NY.

Meanwhile, Kashmiris on both sides of the Line of Control and the world over will observe Wednesday, as Yaum-e-Istehsal.

Kashmiris continue to denounce illegal, immoral and unconstitutional step, which India took on this day in 2019 to strip Indian illegally occupied Jammu and Kashmir of its special status.

According to Kashmir Media Service, since the abrogation of Article 370 of the Indian constitution in August, last year, the Modi-led fascist Indian government continues to adhere to the policy of coercion, torture and deception.

Modi-led Indian BJP govt continues to undermine the Muslim majority character of Jammu and Kashmir by changing its demography.

Meanwhile, the veteran Hurriyat leader, Syed Ali Gilani, in a message to the people of Indian Illegally Occupied Jammu and Kashmir.

Furthermore, he called for observing complete shutdown on Wednesday.

Widespread protest against Indian govt in 17 cities across Europe