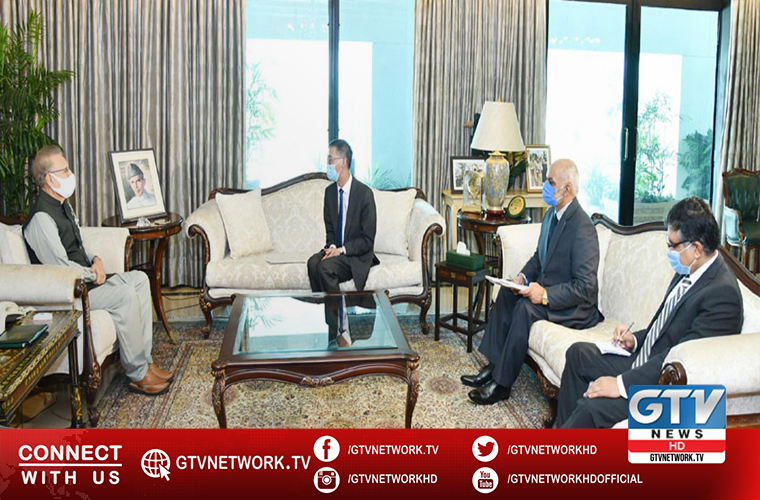 President Alvi said Islamabad highly values its relationship with China which has always stood by Pakistan at difficult times.

He assured that Pakistan would continue to support One-China Policy and stand by China on core issues of national interest, including Hong Kong, Tibet and Taiwan.

Meanwhile, the Ambassador thanked the government of Pakistan for supporting his country’s stance on Hong Kong and other issues of national interests.

He also lauded his support to China during the Covid-19 crisis.

President Alvi was the first foreign head of state to visit China after the outbreak.

The Ambassador also delivered a message of felicitation from Chinese President Xi Jinping on his forthcoming birthday.

Dr Arif Alvi emphasized that both countries need to further enhance cooperation in the areas of information technology, economy and defense.

The meeting stressed the need to further deepen and expand strategic cooperation in view of emerging regional environment.

Both sides agreed to work together for promotion of regional peace and stability.

Furthermore, President expressed his gratitude to China for its support during Corona Pandemic.

He also thanked China for support in the United Nations Security Council against India’s illegal and unilateral steps in India Occupied Jammu and Kashmir.

CPEC has a major role

While addressing a webinar via video link, he said a number of projects have been completed under the CPEC, while several others are either in completion phase or to be initiated soon.

He said ML-I project will be launched soon to improve track of the Pakistan Railways.

He said optic fiber cable has been laid in different parts of the country, especially in Balochistan.

The President noted Gwadar as a crown jewel of CPEC while citing completion of several projects in the area. He announced completion of many others with the Chinese help shortly.

Moreover, he said the Gwadar international airport will offer connectivity to the outside world.

H also cited said special economic zones are being set-up across Pakistan which will usher in an era of economic development and progress in the country.